A couple of years ago I got into an animated discussion with an acquaintance who is an honest-to-God young earth creationist.  He's a young guy, a huge computer geek and really smart.  In fact he's geeky enough actually sit down and add up the dates in the Bible to get his own estimate for the biblical age of the universe, and to defend his estimate in a highly detailed manner.  Like Bishop Ussher and Isaac Newton before him he estimated that our universe was more or less 6,000 years old.

Clearly this was not the type of conversation I had in grad school, but in a lot of ways this guy was "my people."  I recognized in him a lot of the same mental habits and personality quirks that you find in people who do science for a living. Geeks like me, in other words. But for various reasons he had never really studied much science and had instead read widely on intelligent design and creationism.

The interesting thing about our conversation is that he wasn't really opposed to the idea of evolution. He basically admitted that going forward into the future, species would slowly evolve in response to the environment and natural pressures. The sticking point really was that 6,000 year old universe, and the need to defend a "literal-factual" interpretation of the Bible. Disbelief in macro-evolution flowed directly from there simply not being enough time to get it done. And he's right!  If the universe were only 6,000 years old there wouldn't have been time for humans to evolve from simpler life-forms.

Still, my friend had the whole ID/creationism talking points down pat, starting from the old parable about finding a watch on the beach and "knowing" that it must have been designed rather than evolved. Of course, relying on human intuition about how the world works is pretty much why we believed the Sun went around the Earth for millennia.  (I mean, just look at it! It goes in a circle, right?) My mind naturally rushed to the astronomical objections to a young earth, i.e. the known distances of objects that we can see and observe. (Of course there are LOTS of good arguments against creationism, this was just what came to my mind). I mean, the vast majority of stars in our own galaxy are farther than 6,000 light-years away, to say nothing of distant galaxies or the CMB.

For example, the remnants of the stars that went supernova and were observed in A.D. 1006 and 1054 are located at a distance 7,200 and 6,500 light-years, respectively. Their observation by ancient astronomers, plus the light travel time from the object, already puts the age of the universe older than 6,000 years.  The center of our Milky Way galaxy is at 27,000 light-years. Every time we observe objects orbiting the central black hole we are looking at the universe as it was 27,000 years ago.

Obtaining distances to even more distant objects is a little bit complicated and not necessarily intuitive to a layperson. Let's just say it involves a lot of calibration. (In fact, determining the rungs of the "distance ladder" is one of the great accomplishments of modern astronomy.) But in case you don't buy all that calibration stuff, we have direct, "intuitive," geometrical distance measurements (via parallax and the Hipparcos satellite) for most bright stars within 1,600 light-years of earth (and the recently launched Gaia mission will be able to measure accurate parallax distances out to 30,000 lyrs).

So unless you think scientists are lying about the speed of light, it's clear the universe is pretty big and pretty old -- far older than 6,000 years. But of course my friend knew all this and had an answer waiting. And it was pretty jaw-dropping (to me at least). The apparent answer to all these objections was that our enormous universe was created 6,000 years ago with the light from those distant galaxies already streaming en route towards us. Zoink.

In one respect it's a superficially clever response, as it it severs the link between distance and time and allows you to accept (more or less) most of modern astronomy. But in another respect it's a disaster. The universe in this tale is basically just an illusion, a film projected on a screen, a visual trick that God is playing on humanity. It's hard to reconcile this vision with a reasonable God, not to mention that it's completely extra-biblical (which we were presumably trying to avoid from the start). We started the conversation by appealing to human intuition and now find ourselves arguing something utterly non-intuitive. 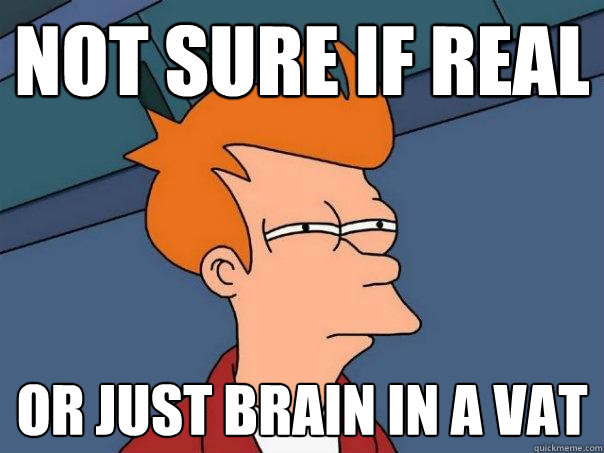 I had never heard this argument before and it seemed pretty silly to me, but apparently it has a long heritage among creationists. It is sometimes referred to as the Omphalos Hypothesis (from the greek word for navel) and it belongs to an infinite class of totally un-falsifiable ideas about the universe. Maybe we are just brains in vats being manipulated by an evil demon? Maybe we all live in the matrix? Who knows.

However, apparently not all young earth creationists subscribe to this idea. And this is where it gets even weirder. The big creationist site Answers in Genesis comes down against the idea that God would be deceptive in this way, and instead rounds up a bunch of poorly understood ideas from relativity and cosmology in order to cast doubt on the basic idea that light travels at a constant velocity. For example, this:

Yeah, no. Relativistic time-dilation doesn't make the universe 6,000 years old. It just doesn't work like that. But there are words written on the page that sound like science, and if you hadn't studied physics it might even sound convincing.

Anyway, it was an interesting conversation and it helped me learn a little bit about where our teaching and public talk about science runs aground. More importantly I think it's good to get outside the bubble and have genuine conversations with people with radically different world views. I doubt I changed his mind during our chat (or he, mine), but I hope maybe I planted the seeds of the idea that you can in fact reconcile science and religion, you just have to read the Bible more metaphorically.
Posted by t at 2:03 PM

I've encountered this thought process before and my response is fine you believe that the Universe is x years old but was created to appear x+y years old. Since science observes the universe and not the mind of God or the FSM or any such thing science should therefore conclude and teach that the universe is very old, that evolution happened/s, etc etc. And you can believe that it's actually only 6,004 (what a tiny tiny world people imagine) but that you should not advocate that we teach that from the perspective of science. Now in practice almost no one would really be able to adhere to this but it's actually a coherent position (never mind what it implies about a God that would do this).

What's particularly amusing is that someone who has no problem asserting that our view of the universe was itself created out of whole cloth for our benefit, rather than bearing any direct relation to the real thing, presumably rejects the same argument as applied to the Bible.

@Anonymous -- Agree, but in my experience everyone tends to think that "science" is in fact on their side. I've literally never met anyone who rejected the authority of science, they just have a different idea what it is that "real science" says.

@Flying Squid with Goggles -- We totally talked about that! The response (IIRC) was that Genesis 2 is talking about only a particular region where humans were placed, presumably on Day 6, and not the whole of creation. But yeah, modern Biblical scholarship pretty much agrees that Genesis 1 and 2 are completely distinct creation stories cobbled together.

@Johnny E -- Yeah, the knots you have to twist yourself into are pretty impressive.

When I run into someone like that, I assert that the Bible actually says the universe was created billions of years ago in a big bang.

This is, incidentally, why the Omphalos Hypothesis is also called Last-Thursdayism.

More seriously, if God is going to that extent of trying to make us believe the universe is billions of years old, *perhaps we should humor him*. You just know a God like that is going to be all 'Did you guys figure out the parallel and speed of light and the exploding universe thing?*gigglesnort*Well, I just made all that up, the whole thing is only like six thousand years old. I had to paint the light in. Hehehe. And you fell for it! Bwhaha...what do you mean I accidentally gave it away in Genesis? Me-damn it!'

Interesting article and I Banget Fill It Love
Fraternal greetings from our.