Kevin Drum has an interesting post at his Washington Monthly blog addressing our human need for moral certainty (and moral superiority) and how that feeds into nationalism and war (and vituperative rhetoric). The two articles he cites within (one a conflicted look back at 2001-3 by a conservative pundit and the other a very interesting short essay by an Israeli writer based in Tel Aviv) are worth a read as well.

It's certainly a truism that pro-war folks love to compare our current adventure to World War II (casting Bush as Churchill and Kerry/Murtha as Chamberlain), and anti-war folks typically bring up Vietnam (with Bush and Cheney as a mixture of Johnson and Nixon). Of course it's neither -- we'll be making entirely new mistakes this time 'round I'm sure. The only certainly in my mind is that things look very bad in the Middle East right now, and everybody (Israel, Hizbollah, Hamas, Iran, Syria, the U.S.) is playing exactly the roles they've been assigned.
Posted by t at 5:53 PM No comments: 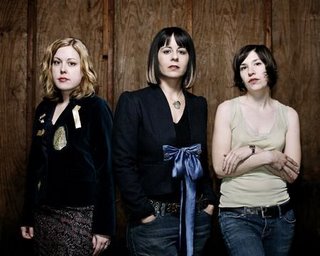 After 11 years and 7 amazing albums, Sleater-Kinney ("the best rock band in the world" or maybe just "America's greatest rock band") are calling it quits. As they posted on their website:

After eleven years as a band, Sleater-Kinney have decided to go on indefinite hiatus. The upcoming summer shows will be our last. As of now, there are no plans for future tours or recordings.

We feel lucky to have had the support of many wonderful people over the years. We want to thank everyone who has worked with us, written kind words about us, performed with us, and inspired us.

But mostly we want to extend our gratitude to our amazing fans. You have been a part of our story from the beginning. We could not have made our music without your enthusiasm, passion, and loyalty. It is you who have made the entire journey worthwhile.

This sucks. It's not like they were running out of steam -- their latest album was maybe their best, as well as a radical new direction for them. But they just don't seem like the sort of people who would make this decision lightly or embark on a nostalgic reunion tour. Still we can hope...

I guess it's apparent that this band meant a lot to me -- it's weird to think they won't be around. I was lucky enough to see them twice live: once opening for Fugazi at a massive outdoor benefit concert for San Francisco Food Not Bombs, and the other at the Metro here in Chicago, which was one of the best concerts I've ever seen. It's almost worth buying a $150 ticket to see them play Lollapalooza in Chicago in August (their second-to-last show) -- almost. At any rate, they will be missed.
Posted by t at 11:38 AM No comments:

On July 3rd, everyone in Hyde Park ducked through the 55th Street tunnel and spilled out onto the Point to watch the distant, professional Navy Pier fireworks ...

... along with many rounds set off by armies of local enthusiasts. This one was shot from the Point over the water, although the water was also full of swimmers. The artillery shelling continued late into the night, and for most nights since.

The distant display, like a giant candle has been lit beside the city lights, glinting off Lake Michigan and the red haze of smoke.
Posted by t at 11:09 PM No comments:

Senator Obama gave a speech recently at the Sojourners -- Call To Renewal conference about the role of religion in public life (full text is found here). I happened to like the speech quite a bit, as did some others. But some folks in the lefty blogosphere are fairly annoyed; Kevin Drum gives a pretty good defense of Obama, but check out the long list of peeved comments.

Mostly they seem up in arms about Obama's use of the "some liberals don't like religion" canard. Which is fair enough. It's an extremely annoying way of editorializing without facts, as used by FoxNews and el Presidente Bush ad nauseum to bash liberals. So shame on Obama for falling into the RNC talkingpoints trap.

But, really, that was just 2% of an otherwise terrific speech on religion and politics and well worth the read. He talked about his personal faith journey. He talked about the biblical call to feed the hungry and house the homeless and create a more just society. Crucially (for me) he spoke of the importance of separation of church and state, and affirmed that religious folks do not have a monopoly on morality. And for the first time in a long time, the MSM was giving favorable media coverage to a Democrat talking about religion (the Chicago Sun-Times even front-paged the talk), which I'm guessing did more to bury the "liberals are anti-religion" storyline than anything else in the past two years. Awesome!

Because, of course, there is already a sizable religious left in this country; it's just not the story that the MSM wants to sell papers with right now. So changing the framing of religious issues is an absolute must for the Democratic Party. If the Republicans are an unstable alliance of the business community and the religious right, then, strategically, the Dems need to find ways to fracture that alliance and pick up the pieces, without losing their soul and becoming Republican-lite Lieberman clones. And I would argue that (oddly) it is the religious conservative voter who is more of a match for the Dems than the corporate types. Just because Coors hires Mary Cheney and runs a few gay-friendly ads does not make them our friends. Ten million photo-ops with cute endangered animals won't make Chevron environmentally friendly. Granted the leaders of the religious right (Falwell, Dobson, et al) are mostly fascist Taliban-wannabes so forget them, but the folks sitting in the pews are getting screwed, just like the rest of us.

A nice mix of economic populism (raise the damn minimum wage already, get some decent health care and more scholarships for working-class families) and ecumenical-friendly issues (end the war in Iraq, save Darfur, crack down on sex trafficking) should do a lot to break the gays-n-abortion stranglehold the religious right has put on the media these days. Anyway, Obama's main point seems to be that sincerity is the key in making these connections. Which I guess means we need more people like him making the speeches.
Posted by t at 9:47 PM No comments: