Have some music! Here are my favorite albums from the past year, replete with youTube-y goodness.

7. Radiohead, In Rainbows -- For a limited time this album was available for download from the band's website for whatever price you wanted. Lots of people grabbed it for free. Using advanced mathematics, I decided it was worth 3 quid 50 p ($7.05 USD), and yeah, it was. It's a great album. Here's a studio version of "Bodysnatchers."

6. The Decemberists, Picaresque -- Kinda-Wes-Anderson-rock, but I mean that in a good way.

5. The Coup, Pick A Bigger Weapon -- Song title of the year: BabyLetsHaveABabyBeforeBushDoSomethin'Crazy. This one's called "We Are The Ones."

4. Okkervil River, Black Sheep Boy -- Jackie turned me on to this band, and they were in heavy rotation on my iPod for a big chunk of this year. I guess you could describe them as alt-country (for lack of a better designation) or storytelling folk-rock, but the lead singer often sings like he's auditioning for Fugazi. Here's a live version of "Black" which captures the boiling anger behind the song, but I miss the bouncy, poppy keyboards on the album version - such a beautiful contradiction.

3. The Arcade Fire, Neon Bible -- The first track from their first album (Neighborhood #1 Tunnels - youTube link) still gives me the chills when it launches into the chorus with gorgeous ascending chords, steel drum tremolos and anguished lyrics. Talk about a tough act to follow, but there's not much about the new album that says sophomore slump. They're supposed to be amazing live (all 43 of 'em)... here's they are doing a live version of (Antichrist Television Blues).
That's right, punks, two french horns and a church organ. As an added curiosity, check out this clip of AF's "My Body Is A Cage" set to the final showdown from Sergio Leone's "Once Upon a Time in the West."

2. TV on the Radio, Return to Cookie Mountain -- This band somehow manages to combine hardcore punk, soul music, Peter-Gabriel-style art rock and (um) doo-wop and makes it kick ass. This album is really good, but a tad tentative - it seems like they're one album away from blowing the doors off the place. Here's a live version of "Wolf Like Me."

I've been quite remiss in not posting more baby pictures. Thankfully, Laura Jean recently posted quite possibly the cutest picture of Quinn yet -- click if you dare. Anyway, here is some more cute for yall... 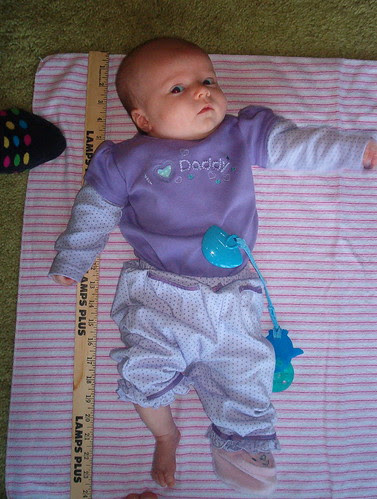 She has grown so much in such a short amount of time it is just amazing. This is clearly a thriving baby (nice shirt too). 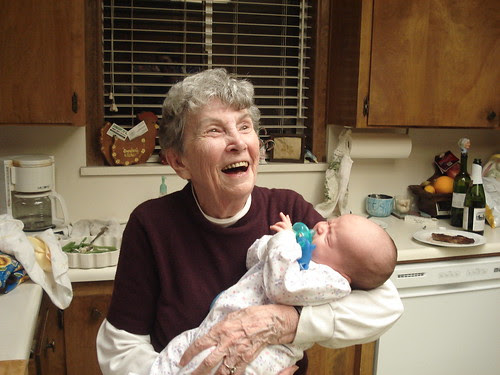 Quinn hanging out with her Great-Grandma Quinn. 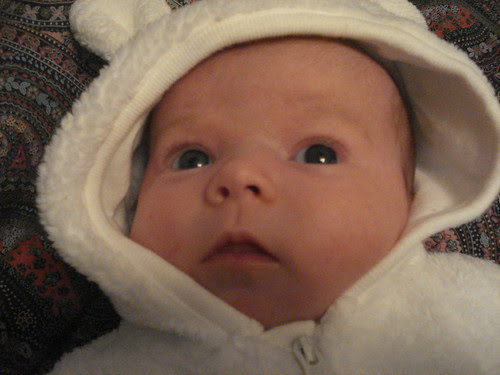 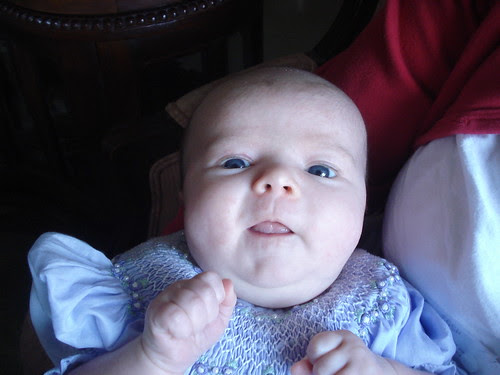 Here's Quinn looking cute in one of her 67 christmas dresses... 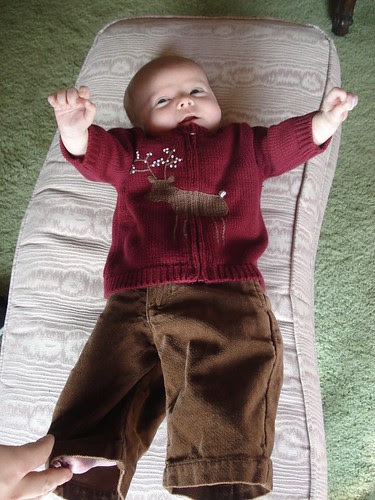 and here she is looking a tad more rustic (note the feet not sticking out the bottom of the pants - a problem she probably won't have for long). One of the most wonderful developments is that she has started really recognizing us and usually gives us a big smile (if she's not cranky, that is). They say, three months is when the social development software inside baby's head clicks on and she's a fully aware person after that. It seems like that process is starting with Quinn and it is a beautiful thing to watch unfold. 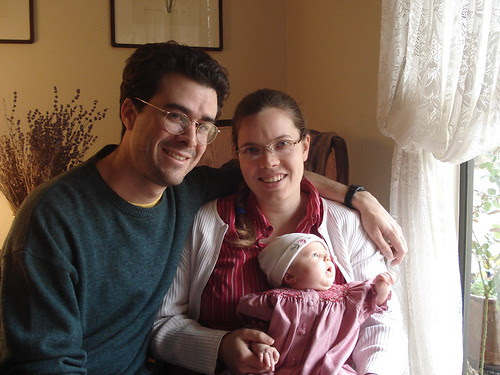 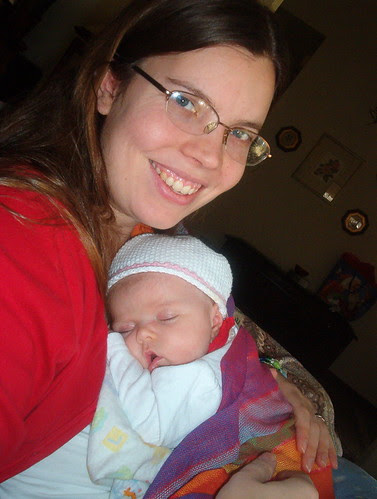 The other amazing development is that Quinn is sleeping through the night! Hallelujah! 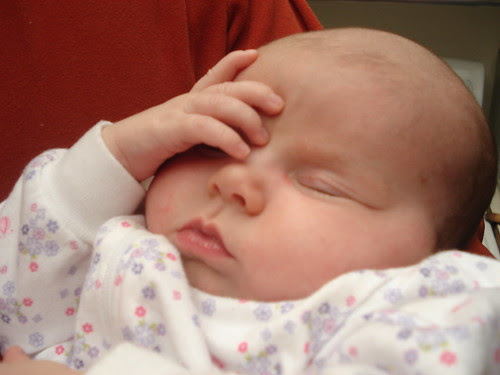 Although sometimes, I think she just doesn't know what to do with us.
Posted by t at 11:38 PM 2 comments: 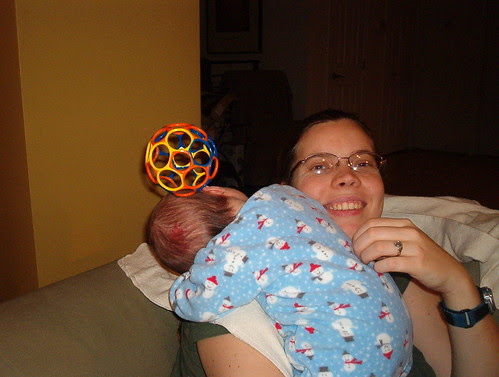 Obama and Edwards (and Clinton)

Well, the Iowa caucuses are upon us, so I figured I would pile a little more atop the heap of internet commentary. In DC we don't vote until April 3 (and apparently we have a caucus, not a primary? Go figure.), so in all likelihood it will have shaken out by then. But still, here are some random thoughts, in no particular order. (Of course, if you'd rather read something actually funny, then try this or this.)

I'm probably voting for Obama, although there's a small chance of Edwards. They're pretty close for me, but for different reasons. Edwards has the policy positions that are probably closest to mine (although truthfully all the Democrats are pretty much on the same page this year). I love his populism and his focus on economic inequality, ending the war, limiting corporate power and establishing true universal health care. Amen, John.

But I love Obama even more and this isn't just Illinois pride talking. He's the real deal: sincere, honest, genuinely interested in the ways government can be an agent for social change. Obama also has the rare gift of being able to preach outside the choir, to independents and conservatives, not by being a triangulating centrist, but by communicating progressive ideals as hopeful common sense. Because the Republican coalition is fraying apart, I think the Democrats have an opportunity to stitch back together some of the pieces of the New Deal coalition that have strayed to the Republicans in recent years (e.g. independents, non-union white working-class voters, evangelicals tired of being played for dupes by the R's, etc.). And I think Obama, more so than Edwards or Clinton, is the person who can do that.

Of course, not everyone loves Obama's "kumbaya shtick" and maybe he's really just the second coming of Adlai Stevenson -- another intelligent, principled, honorable loser from Illinois. Maybe he would crumple in the general election from a relentless swift-boating and constant jeering references on FoxNews to "Barack Hussein Osama." Who knows. Like a lot of progressives this year, I'm placing a larger value on electability than in the past, especially since all the Democrat front-runners are all "good enough" in some sense and the Republicans are falling over themselves to see who can bag on immigrants and threaten other nations most convincingly. If you could prove to me that Hillary Clinton had the best chance of winning the White House, then I'd probably line up behind her with minimal grumbling. But of course, each of the three candidates has a claim on electability.

And truth-be-told, there's at least something to be said for Hillary. (1) She's a grown-up and will go a long way towards repairing the damage Bush has wrought, (2) she may be more centrist than Obama or Edwards, but she'll likely appoint good people to important positions, and (3) on the most important domestic policy issue (health care) she might very well be the best person for the job. I lean away from her because she's too hawkish and too triangulating for my tastes and, plus, its just embarrassing to have the White House be held by two families for 28 straight years. Ugh.

Still, I'll happily vote for Hillary over any of the Republicans candidates. After 8 years of Bush, its hard not to feel delicious delicious schadenfreude at the Republican prospects this year. I've been thinking for a while that the nominee will probably be Romney by default. Huckabee's got a shot, but the Wall Street wing really hates him and, man, does he seem out of his depth or what?

Giuliani's poll numbers are cratering, thank god (he might finish 6th behind Ron Paul in Iowa!); he may be allegedly socially liberal but he talks like he'd lead us into World Wars 3 and 4 within weeks of taking office. Yikes. As for the rest? I used to sorta like McCain, but he's really shifted rightward this year (for all the good it's done him) and Thompson just doesn't seem to have the fire in his belly. It's really hard to imagine any of these guys being able to unite and rally the disparate wings of the Republicans the way Bush did in '00 and '04.

I'm guessing the nominee will be Romney - the John Kerry of the Republican Party. And he'll really have a stiff electoral headwind against him to beat any of the 3 Dems. The last two elections have come down to whoever wins 2 of 3 of Florida, Pennsylvania and Ohio, and if 2006 is any indication, both PA and OH are much more solidly Democratic than in 2004.

So that's that - fingers-crossed we'll see how it all goes down tomorrow.
Posted by t at 8:31 PM 3 comments: 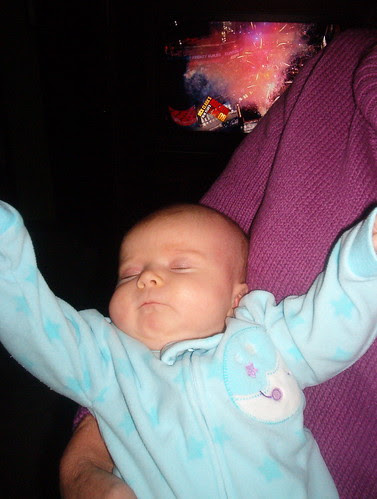 Quinn rings in her first new year as she often does - by sleeping soundly (although she did wake up a few hours later, right on schedule...). Happy New Year, everyone!
Posted by t at 12:33 AM 1 comment: