Annoying and persistent illness behind me; California (and Colorado) ahead. And Neko Case has a new album out.

Here's a funny article from the Chicago Maroon about a visit by members of the odious (and utterly irrelevant) Westboro Baptist Church to the U of Chicago campus (apparently to protest Obama).

Email ThisBlogThis!Share to TwitterShare to FacebookShare to Pinterest
Labels: activism

My sister Jessica told me about this fascinating New Yorker article by John Colapinto: "The Interpreter." The article concerns the Pirahã people from the amazon region of Brazil whose language may (or may not) be the only known counter-example to Chomsky's theory about a universal grammar underpinning all human languages.

According to the article, Pirahã is a fiendishly difficult language for English speakers to master. The only outsiders to make the attempt were a handful of Christian missionaries looking to translate the Bible, and apparently only the linguist Dan Everett and his wife Keren have achieved any proficiency in it at all. Dan Everett recently claimed that the Pirahã language does not exhibit recursion -- embeding of clauses within clauses -- a property claimed by Chomsky to exist in all other known languages.

"According to Everett, however, the Pirahã do not use recursion to insert phrases one inside another. Instead, they state thoughts in discrete units. [...] Everett says that the Pirahã have this cognitive trait but that it is absent from their syntax because of cultural constraints."

Other experimenters have claimed that the Pirahã are unable to learn to count:

"Gordon had visited the tribe with Everett in the early nineties, after Everett told him about the Pirahã’s limited “one,” “two,” and “many” counting system. Other tribes, in Australia, the South Sea Islands, Africa, and the Amazon, have a “one-two-many” numerical system, but with an important difference: they are able to learn to count in another language. The Pirahã have never been able to do this, despite concerted efforts by the Everetts to teach them to count to ten in Portuguese.

I asked my linguistics grad student friend about the article and she confirmed that both of these claims are extremely controversial in the linguistics world.

Everett is careful to point out that this does not imply that the Pirahã are any less intelligent than other humans, but he does import an extremely strong role to culture in shaping cognition and linguistic structure. It is interesting to note that while this claim is inspired by the Sapir-Whorf Hypothesis, it is actually somewhat different. The S-W hypothesis posits that the structure of a language influences cognition (e.g. the long-discredited Eskimo-snow urban legend), but we might just as easily read this evidence as environment and culture influencing both language and cognition.

Steven Pinker in The Language Instinct (p. 66) comments that only one other truly "dramatic" finding in support of the Sapir-Whorf hypothesis has been reported. Alfred Bloom quizzed Chinese and American students on the logical implications of various counterfactual statements (statements of the form, if A, then B). Surprisingly, the Chinese test subjects largely answered incorrectly -- a fact Bloom attributed to the lack of a direct subjunctive construction in their native language. The results did not withstand scrutiny. Later researchers identified serious flaws in Bloom's methods -- from poor translations to ambiguous questions -- and Bloom's results were not reproduced.

Having read the article it is very hard to know what to make of all this, but it certainly is interesting and worth reading the whole thing. Currently, all this speculation is really only based on one researcher, so I'm inclined to be pretty skeptical until these claims are independently reproduced. Even with the best of intentions and the opennest of minds, this sort of stuff seems genuinely hard to tease apart.

Everett has also recently published a scientific memoir about his time with the Pirahã called Don't Sleep, There Are Snakes.
Posted by t at 9:36 AM 2 comments:

Forty years ago today, students and faculty at M.I.T. organized a series of teach-ins to protest "the misuse of scientific and technical knowledge" and to call for the redirection of scientific resources to help solve "pressing environmental and social problems." Out of those teach-ins, the Union of Concerned Scientists was born; a bit more UCS history can be found here.
Posted by t at 11:58 PM No comments:

You don't have to grow up

Despite the fact that a grown-up Calvin is kinda wrong - this is pretty charming. 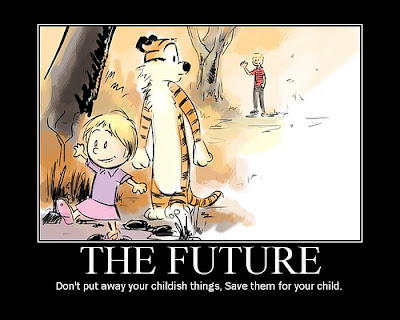 It's true. I am really looking forward to all the neat things Quinn will get to do as she gets older: camping, bike riding, first telescope, etc. (via. more grown-up Calvin found here.)
Posted by t at 9:08 PM No comments: