Check out this article from the Washington Post by Juliet Eilperin:

A senior Bush political appointee at the Interior Department has rejected staff scientists' recommendations to protect imperiled animals and plants under the Endangered Species Act at least six times in the past three years, documents show.

In addition, staff complaints that their scientific findings were frequently overruled or disparaged at the behest of landowners or industry have led the agency's inspector general to look into the role of Julie MacDonald, who has been deputy assistant secretary of the interior for fish and wildlife and parks since 2004, in decisions on protecting endangered species.

The Scientific Integrity Program at UCS along with several other groups did a lot of work bringing these documents to light. They mention us later in the article and quote my boss. Here's our press release and website detailing the endangered species and the instances of political manipulation covered in the Post article.
Posted by t at 5:01 PM 1 comment:

While we're on the topic of random stuff I've always wondered about... which is the most common month for birthdays? I feel anecdotally that I meet/know a lot of people who, like me, have a November birthday, but maybe I just notice them more? What's the real deal?

It turns out that the Internet does indeed know the answer to this question (are we surprised?) but it's actually kind of hard to dig up. Every search I tried with any combination of the words 'birthday' and 'probability' automatically gave me a gazillion links to the Birthday "Paradox", which is a pretty interesting statistical oddity in its own right and not entirely unrelated, but also not quite what I was looking for. As these things go, it's always a matter of finding the right google phrase -- in this case "seasonal variation of births" did the trick. In the United States from 1978 to 1987 the distribution of birthdays looked like this: 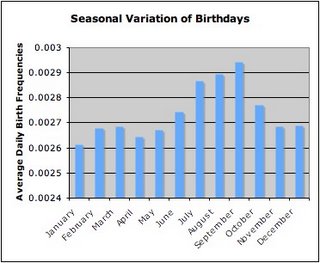 Data: U. S. Dept. of Health and Human Services, 1989
So September is the most popular birthday month, and January the least. November is actually a bit below average (so much for my subjective impression). Notice that my plot is slightly deceptive in that the y-axis doesn't go down to zero. This means that the 'big' difference between January and September isn't really that big - the variations are only about 5% of the average. It seems, people tend to make babies just about any old time of year.

Perhaps most interestingly, this seasonal variation of births is not the same across cultures and nations. The U. S. peaks in late summer whereas Northern Europe has more spring birthdays. No doubt the variations are very different elsewhere in the world and probably have many interesting implications for the sociologists to untangle.
Posted by t at 11:04 PM 4 comments:

Email ThisBlogThis!Share to TwitterShare to FacebookShare to Pinterest
Labels: data

Singing on the Metro

I see people all the time on the Metro with little white earphones plugged into their heads, and I wonder constantly why more of them don't just burst into song (or at least nod their heads to the beat). No; it's mostly that dull, Monday-morning commute-stare. Not that I don't understand the dull, Monday-morning commute-stare, but this morning Sigur Ros popped up on my iPod (free mp3 here), the sun was shining, the air was crisp and shiny and suddenly it was quite a bit like being in my very own Sofia Coppola movie -- a little trippy, a little spacey, a little bit of public transportation -- but definitely worth breaking into song for. La la la.
Posted by t at 8:15 PM No comments:

Oh man, I missed my own first blogiversary - now I'm in trouble. 1 year and 13 days ago I decided to blog and this marks my 78th posting - roughly 1.5 a week. I'm a tad surprised I actually stuck with it, although I have decided I rather enjoy blogging. I certainly have more ideas for posts than time to write them, which is good and bad, I guess. Onward into the 2nd season...
Posted by t at 11:04 PM 1 comment:

Email ThisBlogThis!Share to TwitterShare to FacebookShare to Pinterest
Labels: blog

As we were driving around Ireland two summers ago, desperately trying not to kill ourselves, we naturally fell into a conversation about how certain countries drive on the right, while others drive on the left. I was intrigued that, off the top of our heads, the only countries we could name that drive on the left were island nations: Great Britain, Ireland, Australia, New Zealand, Japan. For nations that share a border, there are bound to be a myriad practical incentives to drive on the same side of the road, such that nations are likely to come into alignment over time. This phenomenon seemed like a good analogy to what physicists call 'spontaneous symmetry breaking' (SSB).

The most familar physical example of SSB comes from ordinary ferromagnets (the things stuck to your fridge). For fairly subtle quantum mechanical reasons atoms in a ferromagnet tend to line up with their magnetic fields all pointing in the same direction. Most atoms don't do this, which is why most materials in the universe (ducks, toast, your little sister) don't stick to your fridge. In other words, if one atom is surrounded by other atoms all with fields pointing in the opposite direction, it will be energetically favorable for it to flip its direction and align with its neighbors. Regions within a magnet where the atoms are aligned and a net magnetic field points in a certain direction are called magnetic domains. An iron bar then becomes magnetized when all of its domains point in the same direction. Alternately, you can de-magnetize a bar magnet by heating it or hitting it with a hammer, which has the effect of randomizing the magnetic domains.

SSB occurs when an initially randomized state (physicists use the term 'symmetric' for this, even though it's a little confusing) spontaneously evolves to a special state. That is, the system moves from a state where the domains all point in random directions to one where they are all aligned. Or to push my analogy further, from a situation where countries randomly choose which side of the road to drive on, to a situation where everyone drives on the left. The point is that it doesn't fundamentally matter which side of the road we drive on, or which way the magnetic field points, but that often there are benefits to going with the flow. And whenever there are such benefits, nature devises ways to take advantage of them. This phenomena is found everywhere in the natural world, from the electro-weak transition to super-conductors to deciding which water glass to drink out of on a circular table. 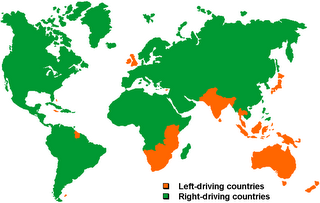 It turns out that the reality of which nations drive on which side of the road is a little more complex than our initial short list of first-world nations would indicate. As can be seem from the map, many of the world's island nations are indeed left-driving countries, but there are also significant pockets of left-driving mainland countries that do share borders with right-driving countries. Most of these countries (India, Pakistan, Bangladesh, east Africa), share a common administrative heritage: the colonial British Empire.

The history of left vs. right driving nations is long and fairly interesting (both links give a good overview). There has been a significant trend over the 20th century towards alignment in these regards, even among former British colonies. A century ago, many more countries drove on the left, but with the increase in car traffic over the years, pressure has mounted to conform to right-side driving. Many nations (including Canada, China and the parts of Europe not invaded by Napoleon) have switched from left to right in the past 100 years, but the only recorded switch from right to left is the island of Okinawa in 1978. Leaving island nations aside, there are really only two domains opposed to the dominant right-driving domain: southeast Africa and the Indian subcontinent (I bet the border crossings there are always exciting). It may be that these regions are populous and (relatively) powerful enough to resist assimilation by their neighbors, or it may be that as car-traffic over the borders increases with time, they too will join the right-driving universe.
Posted by t at 10:21 PM No comments:

In addition to the venerable Darwin fish, we have a very cool Ichthus fish as well as a Flying Spaghetti Monster. Laura Jean wishes me to point out that while these 3 icons do indeed gain one-third equal time on our bumper, only two of them represent plausible theories of the origin of human life on earth. Our third icon, the Ichthus fish, symbolizes rather a religious faith, and which actually makes no claims about biology one way or the other (despite what some people keep insisting). Apples to oranges to noodles.

You can also see evidence of our hard-won new license plate as well as our plug for the lovely, if remote, Scottish Isle where we honeymooned. Out of view to the left is our obligatory political bumper sticker.

Apparently, our car now has a lot more to say. Hopefully, it'll keep running too.
Posted by t at 9:49 PM No comments: