Hey, so we live in California now! Go figure! We had a gorgeous West-coast-style sunset this evening to mark the event...
Posted by t at 12:49 AM No comments:

Someone at Netflix apparently cleaned behind the refrigerator and found their long-missing copy of the Coen Brothers' debut film Blood Simple. Which means that I got to see it the other night. Which means (I think) I have officially seen all of their films. Check!

For what it's worth here's my ranking.Not to say that this was such an onerous task. I mean, it's a pretty damn high level of quality, so it's not like you have to slog through many stinkers just to say you've seen them all. Blood Simple goes in the middle of the pack because it's essentially a rough draft for Fargo and a little emotionally removed, but still a great movie.

The trailer for the new one (A Serious Man) looks reasonably interesting, but mainly I am waiting on tip-toes to see what they'll do with Michael Chabon's Yiddish Policeman's Union.

[Update Dec 2010: Chris Orr posts his Coen-list here. I liked but but wasn't blown away by A Serious Man, and hope to see their remake of True Grit soon.]
Posted by t at 8:35 PM No comments:

I vividly remember the following conversation from high school:

Female friend: Someday a woman will be president.

Female friend: But Margaret Thatcher was prime minister of Great Britain for many years!

Male friend: Oh yeah. Well, everyone knows that it's really the Queen who runs things over there.

For some reason I am reminded of this whenever I read about the bizarre things people are saying about health care reform. Such as the notion that if Stephen Hawking were British he "wouldn't have a chance" under the National Health Service. Or Medicare recipients protesting against "socialized medicine." Or Sarah Palin talking crazy talk about "death panels" that don't exist. Sigh.
Posted by t at 8:43 PM 3 comments:

This row of obsolete water treatment towers is one of the weirder corners in DC - not far from where we live. Covered in vines, trees sprouting from the roof. In the light of a setting sun they can look downright Tolkien-esque -- like a string of abandoned elvish castles. In addition to the towers, the green grass covers over extensive catacombs which housed the guts of the treatment process. Very epic. 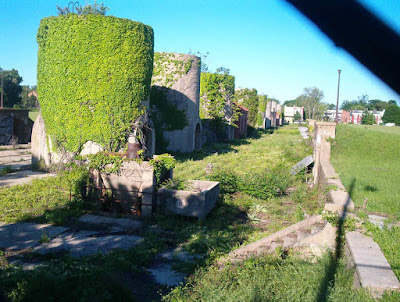 From 1902 to 1985, McMillan Reservoir was one of the primary water treatment facilities in the city. Now it is largely abandoned and falling to bits. The city keeps trying to find a way to develop this (extremely valuable) mid-city property (a not uncontroversial plan of action). But no ground appears to have been broken yet. 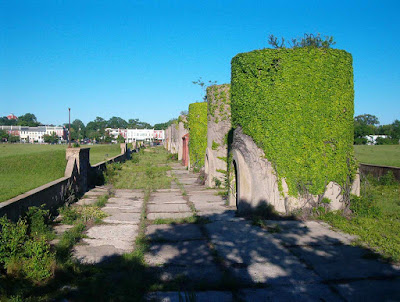 I was curious about the purpose of the towers. Apparently the process used here was slow sand filtration, and so the towers basically stored the sand. But here's the weird thing about sand filtration: all of the purification work is done not by the sand, but by a thin layer of biological organisms (bacteria, protozoa, etc.) living on the top layer of the sand. To keep the filter working efficiently you have to continually maintain this crust of organisms. The somewhat bizarre term for this biofilm is schmutzdecke (German, naturally, for "dirt cover"). 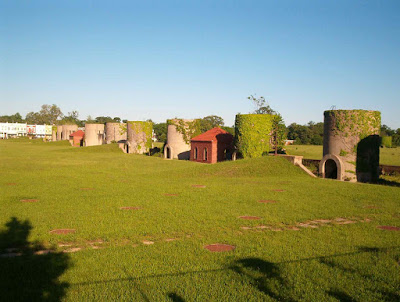 Now that we're leaving town, it seems like a good time to put together a DC mix! Suggestions always welcome, leave 'em in the comments.

Postal Service, The District Sleeps Alone Tonight
DC is a transitory place. Many people come here for jobs and internships, put in their time and then go back to where they come from. This Postal Service song nicely captures that loneliness and dislocation--and how the brightly lit, but deserted, downtown feels after dark.
Chuck Brown, Block Party
Until recently, DC hasn't been known for its hip-hop, but you can't talk about the city without mentioning go-go. Go-go is the legendary local music subculture (with the eponymous boots) that never quite hit the bigtime. It's basically a descendant of '70s funk but with a unique backbeat to it. Chuck Brown is the guy generally credited with creating the sound.

Junk Yard Band (Live 1994)
The Junk Yard Band was apparently formed in the '80s by a bunch of 10-year-old kids from the Barry Farms projects banging on hubcaps and plastic tubs.

Fugazi, Turnover (Live 1991)
The other DC music subculture that never hit it big (mostly by design) was the DC hardcore scene of which Fugazi is probably the most widely revered.

The Magnetic Fields, Washington D.C.
I'm partial to this Magnetic Fields song, but I was only able to find this cover version (which is kinda cute anyway but lacks the cheerleader shouting of the original).

Duke Ellington, Take the 'A' Train
Ellington was born in D.C. in 1899 and launched his career here.

Wale, Chillin
Speaking of hip-hop, Wale is the local MC who's been getting some attention lately. He's got an album out next month and this single ft. Lady Gaga. Decent. Plus he's got a lot of DC pride. (No embedding, but you can listen here.)
Posted by t at 9:11 PM No comments:

Advice of the Day

From sci-fi author John Scalzi, something to ponder:

Because one hears of writers who have made great sacrifices in order to work on their writing, including giving up jobs, friends and spouses in order to put their words into being. Does one have to be willing to put that all on the line for one’s art?

Nah. What you really need to do is cut an hour of TV watching out of your day. Seriously, now: Keep your job, keep your marriage, keep your friends, keep the kids. Just drop an hour of TV.

Because, look: If you’ve got an hour a day to write uninterrupted, you can probably manage between 250 and 500 words a day. Do that five days a week, and in the course of a year that’s between 65,250 and 130,500 words; i.e., hey, you’ve gone and written a novel. All while keeping your day job and not turning into a hermit. This is not complicated.