Headline of the Day

...comes from the always funny Roy Edroso:
Scott Brown Wins Mass. Race, Giving GOP 41-59 Majority in the Senate
And that pretty much sums up the Congressional Democrats' embarrassing flailing over the past 24 hours. Yes, it's a bummer that they lost Teddy Kennedy's seat, but the panicked overreaction has been much worse. They need to take a few days and a few deep breaths and realize that they still have the largest House and Senate majorities in decades. They are on the cusp of passing health care reform, if they want it.

Anyway, who knows how this will play out, but Ezra Klein sees signs that they are stepping back from the brink and realize that passing nothing is "electorally unthinkable." And of course, none of this is to say there aren't huge, huge problems with the Senate Bill (or that the Dems aren't headed for big losses in November) but I still think the best way to improve the bill is to pass it now, create a political constituency for it and improve it year after year.

The next step is for Obama to make the case for how exactly this will benefit people. He's done a lousy job of that so far, but no one doubts that he has a talent for this sort of thing.

Ugh. What a colossal unforced error the Coakley campaign turned out to be. Following this whole health care debate has been like watching the last two minutes of a damn redskins game. They're up by like 20 and although you can't quite see how they can lose, you know somehow they will find a way. This makes all those months of dithering look pretty dumb. Remember when Obama said he wanted a Senate bill before the August recess? August!

If they're smart the House Dems will just pass the Senate bill as is, send it to Obama, work out the kinks in reconciliation and move on to a jobs bill. No more sending it back to the Senate for another round of hand-wringing and hostage-taking from Nelson and Lieberman. We'll see if they've got the guts to stick up for a bill they already voted for.

And find some better candidates for the midterms.
Posted by t at 9:22 PM No comments:

Climate Change and Your Health

Here's a great video of my friend Ari talking on the teevee about how climate change will affect your health. (Sorry, no embedding, as far as I can tell.) I think he does a great job (talking on live TV is hard stuff) and I think it just might hit home for some people that, yes, we should do something about climate change now.
Posted by t at 9:56 PM 1 comment:

Some good movies from the past year, now with sporadic footnotes!
Also worth watching: Synecdoche NY4, Blood Simple, Away We Go5, Hellboy 2, Harry Potter 6, Let The Right One In, Man On Wire, Pineapple Express, In Bruges

I would also note, in passing, that this NYT interactive graphic showing the ranking of movies in people's netflix queues by zip code is really fascinating.

---
1 OK ... not technically a movie. We spent most of this year watching all five seasons of the HBO TV series, but it's been a long time since I've seen a movie this well conceived, written and acted.
2 I can't choose - they're both terrific. And I'm not just saying that because I'm especially attuned to kids movies these days -- LJ and I went to see Up on our date night. Pixar can (apparently) do no wrong.
3 If you can overlook one glaring plot-hole this movie just works on every level, from insightful political criticism to blood-pumping action.
4 Typically brilliant and mind-bending directorial debut from Charlie Kaufman. Too bad it's such a downer.
5 I'll admit this is not the greatest movie ever. The first act is pretty ham-handed, but it finds its rhythm by the end. Basically I just can't resist a movie that is so exactly tuned into where my life is at this moment in time...
Posted by t at 8:44 PM No comments:

Heh. Via youTube, here's the opening scene and credits of Fresno: the Miniseries.

The show was a spoof of Dallas and other nighttime soaps. On the theory that no publicity is bad publicity (and a healthy ability to laugh at ourselves) I think it was actually pretty popular in Fresno. I was ten at the time it aired so I wasn't allowed to watch it, but I seem to remember it generated some buzz. At least the phrase "tastes like fresno" has stuck around.

Sadly not available on DVD (although bootleg copies can be found, allegedly...)
Posted by t at 1:10 PM 2 comments:

This week all the adspace at my metro stop was taken up by an oil corporation trying to convince people that it is thinking about the "new energy future" -- presumably to ensure that future still has a lot of oil consumption. For example. 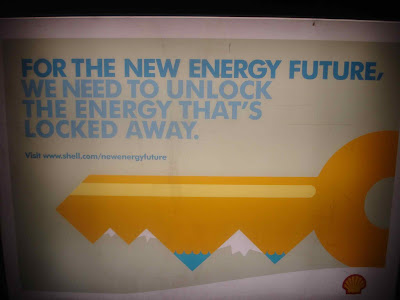 So ... which type of energy should we unlock? Oh right, the energy that's locked away. No doubt Shell will get right on that. Nice work, marketing geniuses!

Still, on the balance, this batch is less objectionable than the last. For several months, this same metro stop was plastered with ads from Chevron (!!!) featuring attractive people gazing soulfully out of the frame and talking about how they were trying real hard to buy less of Chevron's product. Gah.

The advertising space in the DC Metro system provides amusements like these on a regular basis. My stop gets a lot of traffic from K Street lobbyists and other so-called thought leaders, and as a result we get a lot of "think piece" advertising. Last year we had dueling ads between the "clean coal" lobby and the "clean coal is a myth" lobby. Save the oceans. Fund the CDC. Stuff like that.

On the Orange/Blue line (which connects Capitol Hill and the Pentagon) you will occasionally see actual advertisements for armored troop transport planes, attack helicopters or like, bullet-proof laptops. Crazy stuff. At first my mind was boggled that a defense contractor would spend so much money just to subliminally pry the brains of (literally) a handful of people -- presumably congressional appropriation and DOD procurement staffers -- but then I realized that I have no conception of the type of money defense contractors routinely deal with.