So, er, I've been slacking on my music listening this past year. This list is really a 'Top 3' plus a few more that I liked but haven't quite absorbed enough to say anything particularly relevant.

Which means: feel free to suggest bands or CDs I should listen to!

After collapsing into tent we were awoken quite early the next morning by the sound of drums. Apparently in Sarayaku, New Year's Eve is for dancing and New Year's Day is the time for more traditional observances. Some of the men began walking from house to house drumming even before the sun was up.

We spent the next two days talking to several of the local leaders and absorbing the beauty of the jungle. On New Year's Day we relaxed and observed some of the festivities, which were a mix of traditional dancing, speech-making and yet more chicha.

In our discussions we heard about the village's resistance to oil exploration on their land. Around 2003, the Argentine company CGC won the right from the Quito government to begin seismic testing in the area. All fine except that the Sarayacans were adamantly opposed to the project -- they were not interested in repeating what happened to the northern oil fields. Resistance to the oil companies took the form of actively escorting company employees off their land (among other things) as can be seen in the documentary, Soy Defensor de la Selva:
[The film was made by Heriberto Gualinga, a local Sarayacan filmmaker. He was nice enough to meet with us, screen his film and answer questions while we were there. The above clip is about 1/3 of the whole film -- the other two parts can be found here and here.]

The confrontation grew more serious when the Ecuadorean army was called in to back up the oil company (later in the film, you can see the Sarayacan women also confronting and disarming the soldiers). There were allegations that the army kidnapped and tortured 4 young men from the village. But in the end Sarayacu was successful. The NY Times had a decent rundown of the conflict and others like it in this article.

It was clear from talking with people that conflict with the oil companies had radicalized Sarayacu. Except "radical" isn't quite the right word. More like: focused their desire to control they way the interacted with the outside world.

There are some indigenous groups in Ecuador -- most famously some communities of the Huaorani -- who live deep in the rain forest and have voluntarily isolated themselves from outside culture. Sarayacu is most emphatically not one of those. Sarayacu has internet access, an agricultural college, solar and gasoline power, flush toilets, and a website. They have opened up their village to eco-tourists (like us), both to cultivate allies and to replace income that might have come from oil contracts.

We also spoke briefly with Marlon Santi, who is the current president of CONAIE - the largest indigenous organization in Ecuador. He pointed out that this local political savvy mirrors the growing political clout of indigenous communities in the wider Ecuadorean politics. Periodic popular uprisings organized by CONAIE have won indigenous people greater control over their lands and have even helped topple a few governments. The indigenous movement has also been on the cutting edge of environmental activism in Ecuador.

There is a lot more to say about our time in Sarayacu, but primarily I was deeply impressed by their gracious hospitality and by the thoughtfulness with which they negotiated their interactions with the outside world. They had clearly thought hard about how they wanted to "develop" their corner of the world, weighed the pros and cons -- and I definitely got the sense that they are in the driver's seat.
Posted by t at 8:14 PM 2 comments:

Zadie Smith has a fun essay where she decides that Obama is more like William Shakespeare (and Cary Grant) than Eliza Doolittle.

Email ThisBlogThis!Share to TwitterShare to FacebookShare to Pinterest
Labels: weblinks

M.I.A. and Blaqstarr do a cover of "Way Down in the Hole" (a.k.a. the theme from The Wire).
So, pretty good. But it can't really hold a candle to the truly demented original...

The morning we entered the rain forest we stopped first at a vista point to gaze and take pictures. Geographically speaking we were at the far western edge of the Amazon watershed, still in the shadow of the Andes Mountains, some two-thousand miles away from the mouth of the river. I remember being struck by the vast wilderness we could see, and the realization that an even greater vastness stretched on over the horizon. The forest seemed so mighty, and yet we had just seen evidence of its fragility too. 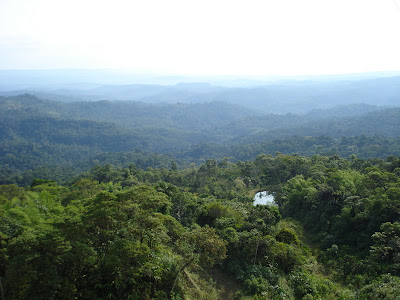 The previous day we had driven from Quito to Puyo (via Banos); today our destination was the village of Sarayaku - a five to seven hour canoe ride from the end of a gravel road. Apart from an airstrip (which was under construction) the Rio Bobonaza is the only road to Sarayaku. We were very privileged to travel on canoes with outboard motors; almost all the people we met traveled via pole-power, which lengthens the trip from five hours to two days. 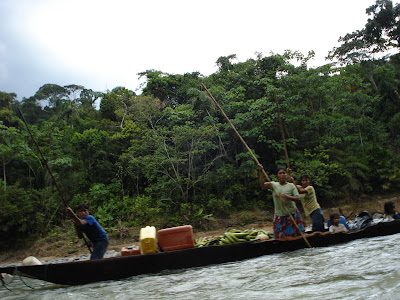 The canoe ride was long and uncomfortable, but mostly totally amazing. As we went downstream the trees got taller and the forest got denser. There were occasional houses, but mostly just the river, the trees and us. The water-level was fairly low, so the canoe ran aground at most bends in the river and we made slow progress. After about four hours we reached the (largish) village of Pacayaku, and that's where things started to get unusual.

First, we were accosted by new year's eve revelers: two teenage boys dressed in drag and waving naked barbie dolls charged out to greet the boat. They shouted at us to give them some spare change (apparently this is a common Ecuadorian new years tradition) and anyone who didn't got splashed.

Second, we stopped for gasoline at the driver's brother's house and we were invited up to drink some chicha, a (pretty alcoholic) drink made of fermented yuca. A new year's eve party was in full swing - they had a CD player and people made a point to ask the gringas and gringos to dance. At a certain point they turned the CD player off and the whole party walked over to the next house for the next round. The whole thing was fun and pretty raucous (and a little disorienting) and of course, we still hadn't made it to our final destination. So after an hour of dancing and a significant buzz, we piled back into the canoes.

When we finally made it to Sarayacu we heard the news that the other boat (the one with all our bags and our guide) might not make it that night due to a mixup. Despite realizing that we were in the middle of the jungle with only the clothes on our back we weren't stressed, mainly because our hosts were extremely welcoming - they set us up in tents and invited us to join them for the evening's celebrations. (The second boat eventually did arrive shortly after nightfall.)

So we partied and danced and drank chicha and generally had a terrific new year's eve. Once the sun went down it got intensely dark out, and we tromped from house to house (over rusty bridges and down treacherous muddy slopes, etc. etc.) following the music and the crowd. The music was a mix of more mainstream latin dance music with a few CDs worth of Kichwa pop music (which I would love to find a CD of).

At midnight they burned effigies representing bad things from the year past. And then we (exhausted) tumbled into our tent. More to come in another post, but here's the picasa slideshow from this leg of the trip.

Statement of the Problem

This post by Yglesias about the Israel-Palestine conflict made sense to me:

Yes. Exactly. This is why some form of negotiated two-state solution is really the only road forward. (Apologies to those idealists pushing for a one-state solution: it's a lovely vision but I'm skeptical that it could be negotiated at this point.)

This is also why I've become impatient when people begin discussing the conflict by providing their take on the region's history. There is sufficient (I won't say 'evenly distributed', but 'sufficient') pain and suffering on each side that partisans can construct histories to justify their cause. But the cold hard fact remains that there are roughly equal numbers of arabs and jews living in close quarters in the holy land, and Israel will never have true security without a prosperous, sovereign Palestinian nation as its neighbor. And vice versa.

More and more, the only way to be pro-Israel is to also be pro-Palestinian. That doesn't make it easy, or even possible in the current climate, and I'm leaving out the nasty details (of course) but let's keep our eyes on the prize here, people.
Posted by t at 8:51 PM No comments:

Rumor has it that Obama will name Vivek Kundra to be his administrator for E-Government. This position (which is different than the long-rumored federal Chief Technology Officer) lives inside OMB and is responsible for coming up with cool ways of using the internet to make the government work better.

Kundra is currently the CTO for the District of Columbia where he recently ran a really nifty contest called Apps for Democracy. The contest allowed regular citizens access to DC's information databases -- everything from real-time information about which parking meters are in use to census and building permit information. The city then gave out prizes for the most innovative web application that makes that information available to the public.

The winners can be found here. The gold-medalist is a website called www.ilive.at that allows you to enter a street address (currently DC only) and it pulls up a ton of information about the surrounding area. It's pretty nicely done and the benefits of doing this sort of thing with federal data would be, of course, enormous. (h/t Emily.)
Posted by t at 12:51 PM No comments:

We snuck out to the movies last night and saw Coraline (in 3D!) - directed in stop-motion animation by Henry Selick (who did the Nightmare Before Christmas) and based on a children's novella by Neil Gaiman.

I want to see it again (and re-read the book) but my first impression was that it was great. The original book is slim and has the disarming simplicity of an old fable or fairy-tale, so obviously the movie needed to expand the storyline a bit. There are a few overly-obvious points, but mostly the added material fits well with the spooky tone of the book, and sets the movie up for some great animated set-pieces. For example, the opening scene was new and, I thought, really grabbed your attention.

The movie theater was full of young kids - and for the length of the film they were eerily quiet. No one had to leave the theater in tears that I saw, but the film does maintain the fairly intense creepiness of the story and its almost harsh take on leaving childhood behind and entering the adult world. Of course, kids these days are pretty tough. At any rate: definitely recommended.

ps- the 3D version we saw was very well-done, although I wouldn't say it was a necessary ingredient of the film.
Posted by t at 12:10 PM No comments: