Still, it would seem reading Ulysses is not the sort of thing you just jump into -- rather you need to ramp up, to somehow gain a head of steam. My plan was to start off with Dubliners (a collection of short stories and Joyce's first published work) and proceed to Portrait of the Artist as a Young Man, before tackling big U.

I just finished Dubliners and it felt like a prelude, so that was appropriate. An insightful and, at times, beautiful prelude, but somewhat sketchy in places. I found "The Dead", the final and fullest story, to be the most compelling. Like most of Dubliners, "The Dead" speaks through the voice of the disappointed, static and provincial lives of the Irish middle class and builds to a poetic moment of illumination in its last lines:

"His soul had approached that region where dwell the vast hosts of the dead. He was conscious of, but could not apprehend, their wayward and flickering existence. [...] His soul swooned slowly as he heard the snow falling faintly through the universe and faintly falling, like the descent of their last end, upon all the living and the dead."

Unlike some of the shorter stories in the collection, Joyce gives himself some room to flesh out his characters, from the awkward and priggish but generally likable Gabriel Conroy to Molly Ivors, an outspoken nationalist who embodies the fire and forward-thinking spirit missing from most of Joyce's characters. Mostly Joyce, unlike nearly all other Irish authors of his time, keeps his distance from the republican politics that burst into armed rebellion only two years after the publication of Dubliners; in these stories Joyce almost seems skeptical that the Irish have the will or the stature to throw off colonial rule.

Many of the other stories are also excellent, although not particularly cheerful. "Counterparts" is a queasy portrait of an actively self-destructing alcoholic clerk that seems to suck all the oxygen out of the room as you read it. "A Painful Case", "Eveline" and "A Little Cloud" all describe lives of isolation and unfulfilled dreams with an uncomfortable familiarity. Even in the shorter, sketchier moments Joyce is a clever writer with interesting things to point to: an idea, a bit of description, an acidic character description. Onward!
Posted by t at 8:22 PM 4 comments:

No End In Sight

This week marked the fifth anniversary of the Iraq war. Just Foreign Policy asks "what is a cautious, conservative, responsible thing to say about the Iraqi death toll?" That is, in addition to the 4304 U.S. and coalition deaths, the 29,314 U.S. wounded, the $500 billion spent so far, how many Iraqis have died since our invasion?

JFP weighs the options. The Iraq Body Count project only tallies the dead who have been reported by the media and official sources -- their answer (almost certainly an undercount): 82,000 to 90,000 non-combatant dead. Two controversial (yet peer-reviewed) epidemiological studies published in The Lancet (pdf here and here) that estimate 650,000 excess deaths (with 600,000 attributable to violence) as of July 2006. And finally, the Iraqi Health Ministry Study which found 400,000 excess deaths over a similar time period (but only 150,000 attributable to violence). JPF extrapolates these two estimates forward (by scaling to the IBC numbers, although regrettably without error bars. sigh.) to conclude:

On the fifth anniversary (and the coming of Easter), I think it is worth taking a minute to mourn these lives and ask why? What for? For oil? For power? For lies about WMD? When violence was up, we couldn't leave. Now that violence is (somewhat) down, we still can't leave. How much longer? How many more? Again, for what? And don't ask John McCain - he thinks we should stay for a good long time.
Posted by t at 5:23 PM No comments:

Something to ponder the next time you're stuck in horrible horrible traffic.
Even more fun is this collection of Java applets that lets you simulate a wide variety of traffic situations. My favorite is #3, where one lane is closed, and you can see that the system is very sensitive to small changes in inflow and speed limit. Which, sadly, seems to imply that there is no 'magic highway design' that would eliminate traffic jams in most situations. Anyway, its a fascinating waste of a few hours.

Laura Jean has a pair of posts up comparing Quinn to both of our baby pictures, so you can judge whether Quinn looks like her mama or her daddy or both. I have to say I see a lot of Laura Jean in Quinn, and at times, my sister Jessica - which means she will certainly grow up to be a strong and beautiful woman.
Posted by t at 9:09 PM 1 comment:

I was supposed to run the St. Pats 8K this weekend, but instead I spent it sick in bed. (Somehow that seems extra pathetic from an opportunity-cost perspective, no?) Grumble grumble. In fact, I'm pretty sure the very minute I clicked submit to pay the (non-refundable) entry fee for the race was the instant the offending germs invaded my system. Stupid germs.

Anecdotally, it seems to have been an especially brutal flu season. My co-workers were all out at various points. At any rate, I got it bad -- hacking cough, rivers of phlegm, intense exhaustion such that I have to take a nap every few hours. And of course, I was dumb and tried to 'work' through it. Now a week later, I'm finally starting to feel a little bit better. Hope everyone else avoided the worst of it. Here's to spring and daylight savings banishing all such infectious diseases!
Posted by t at 9:54 PM No comments:

The Physics of Sailing

Thanks to my Dad, I've been sailing almost yearly since I was a kid, but my understanding of how boats and sails work has always been somewhat, um ... operational. That is, I know how to keep the boat from tipping over in certain situations by doing certain things, and I know the general strategies for going in various directions (tacking upwind, etc.) 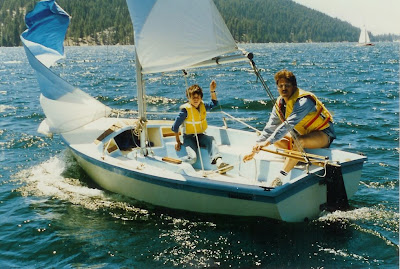 But, there is probably no sport where exploitation of the laws of physics is so central or so apparent, so I always wondered about the details of how it all works. The problem is just engineering-y enough that it doesn't really crop up in either physics undergrad or grad courses (at least the ones I took). I think this ignorance is somewhat general in the physics community since "How Boats Work" was the topic of at least one informal but heated "cookies" discussion in grad school (which is actually an excellent way to learn about stuff like this, I've found).

Anyway, Physics Today rides to the rescue with a fun and detailed review article by Byron Anderson entitled The Physics of Sailing. Part of this discussion, inevitably involves the physics of wings and lift generation and the various popular yet incorrect theories of lift. To wit:

"Like airplane wings, sails exploit Bernoulli's principle. An airplane wing is designed to cause the air moving over its top to move faster than the air moving along its undersurface. That results in lower pressure above the wing than below it. The pressure difference generates the lift provided by the wing. There is much discussion of whether the pressure difference arises entirely from the Bernoulli effect or partly from the wing's impact and redirection of the air. ... A NASA website has an excellent discussion of the various contributions to lift by an airplane wing. It disputes the conventional simple version of wing theory and emphasizes that lift is produced by the turning of the fluid flow."

But there is a lot more to sailing than sails, and the article goes into some depth on the physics of keel shape, turbulence, wave resistance, hull speed. Plus there are lots of fun little facts -- like the fact that maximum speed comes with the wind perpendicular to the direction of motion. Or that iceboats can reach speeds three times faster than the windspeed and hydrofoils can get up to twice windspeed. Awesome! Anyway, I thought it was a fun read.

More than one in 100 adults in the United States is in jail or prison, an all-time high that is costing state governments nearly $50 billion a year and the federal government $5 billion more, according to a report released yesterday.

With more than 2.3 million people behind bars, the United States leads the world in both the number and percentage of residents it incarcerates, leaving far-more-populous China a distant second, according to a study by the nonpartisan Pew Center on the States.

This number -- which represents a tripling of the number of incarcerated over the past 20 years -- is driven not primarily by population or a rising crime rate, but by stricter sentencing policies.

Now obviously, crime stats are complicated and likely to be interpreted through an ideological lens, so I won't even try to interpret what this "really" means. The report itself -- which is not too long and an interesting read (download here) -- limits itself to discussions of the expense and societal trade-offs of maintaining such a large prison population. But still, it is a sobering statistic and a reminder that we as a society could certainly be doing better on this front.
Posted by t at 7:01 PM 1 comment: