We jam the circuit yeah

I've been complaining about the lack of good music these days and about too many kids on my lawn. Clearly my problem has been not listening enough to the Coup. The new album--"Sorry to Bother You"--is fantastic. If you're not familiar with the Coup, they're a hip-hop group from Oakland who've been a well-kept secret since the early '90s. Their music is a blend of political activist hip-hop with funky party music. Serious like Rage Against the Machine, fun and catchy like Outkast, imagining the revolution as a giant block party.

The new album has a different sound, less P-Funk and more the Clash. You can tell that Boots Riley has been hanging out with Tom Morello because the album has got lots of guitars, sometimes fuzzed out ("The Magic Clap"), sometimes thin and sharp and garage-y, like this one:
There's a lot of experimenting on this album and not all of it works, but for the most part the fusion of hip-hop with post-punk, new wave indie rock goes goes down smooth. In terms of rap-rock hybrids, I'll take this any day over Korn or Limp Bizkit.
Posted by t at 12:13 PM No comments: 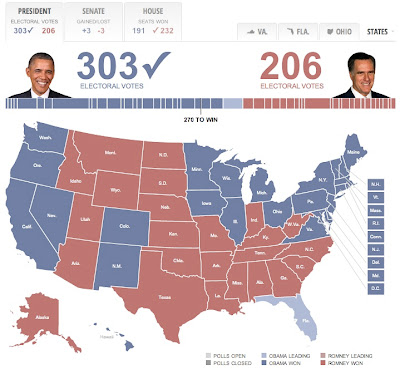 First off, I am greatly relieved that the gains of Obama's progressive coalition (most crucially Obamacare) will not be rolled back and that he will have 4 more years to make slow, frustrating, incremental progress. I'm glad that the birthers and the Muslim-baiters lost and that their simmering xenophobia against the president wasn't validated. Romney's gracious concession speech took some of the sting out, but man was he the wrong guy at the wrong time. I'm also ready to clear out some space in my head to think about something other than electoral politics. Consider this a mental spring-cleaning post.

The space of issues addressed in national elections is so narrow. On many of the most crucial topics there is either a bipartisan consensus or a conspiracy of silence: climate change, the war on drugs, the war on terror, incarceration, voting rights, the surveillance state, campaign finance reform, etc. This silence is a structural problem during elections, but for the other 4 years it's incumbent on us the citizenry to shift the debate and push these topics into the conversation. That's sort of where my head is right now.

Obviously, last night was a big break through for LGBTQ rights. Our first openly gay Senator and (possibly) 4 states legalizing marriage equality (!!!). Change seems so slow for so long and then it comes on so fast. And 2 states outright legalizing marijuana (not just the medical kind)? Wow. Is that the first shot in the war on the war on drugs?

I am also grateful that the tidal wave of Citizens United dark money did not put Romney o'er the top. In fact, the election proved pretty handily that the marginal value of that last ad buy in Ohio is pretty much zero. Maybe the tide of plutocrat-cash will recede a bit. In CA ballot initiatives it looks like Three Strikes has been reformed (yay!) and Prop 13 amended (yay!), although the Death Penalty survived (boo!).

If Obama were smart he would push immigration reform first thing in January. The big media narrative is that Romney lost due to demographic changes and that the R's will have to evolve or die. This might make a big bipartisan bill doable. We'll see. Best pundit line of the night: "Romney self-deported himself from the White House" with his far-right shift on immigration in the primaries.

Here are a handful of interesting takes on the results:

Finally, the polling averages were pretty bang on. If I'm reading it right Nate Silver went 51-for-51 (just barely calling FL for Obama) and so did Pollster. A lot of conservative pundits were waaaay off, and I'm not sure if that's just industrial-strength epistemic closure and the Fox Bubble, or more a function of needing to boost Team Red in the homestretch. I kind of suspect it was the former.
Posted by t at 12:32 PM 2 comments:

Your Election in Charts

Here's a bit of pre-election Obama propaganda in chart form, making the case that his domestic agenda has mostly been pretty good, if not the magical transformation some hoped for.

For me the policy that stands out as most worth saving are the pre-existing conditions ban and the coverage of 30 million uninsured under Obamacare. Mostly I want Obama to win so that those policies will come into effect in 2014 and won't be repealed as Romney has promised. More than the specifics of the law, the survival of Obamacare would signal the ability of government to actually make progress on the really hard problems facing the country (like health care), instead of just talking them over for decades on end. If Obamacare survives then it can be tweaked and improved, if it's repealed then all the political effort will have been wasted and we'll be back with the crappy status quo. The political repercussions of an Obamacare repeal would be enormous, to say nothing of the human toll.

In addition, whoever is elected will most likely get credit for the economic recovery. It would be crushingly unfair to see a President Romney take credit for Obama's tough, unpopular decisions.

After four years I am still mostly positive toward Obama. He hasn't been perfect. Some of his failures are his fault (such as the drone/terrorism fiasco), while others are the result of a broken Senate and a remarkably skillful and unified opposition. But he's pointed in the right direction.

Does the Drone War Disqualify Obama?

Just a few thoughts on voting, Obama and the Drone War. There has been a cottage industry in articles arguing that liberals and progressives should refuse to vote Obama due to his continuation and extension of the most egregious abuses of the War of Terror. These articles mostly come from conservatives (Conor Friedersdorf), libertarians (Glenn Greenwald) or the far left (Freddie DeBoer). More mainstream liberals like Jonathan Chait and Andrew Sullivan condemn his civil liberties record, but are quite positive about his presidency. There's been a lot of discussion in my Facebook stream on this point too.

It's a legitimate question and it should be a troubling one for progressives who hoped that Obama would usher in a more reasonable foreign policy. Still after the Bush-Gore-Nader debacle, I've generally viewed voting in national elections as a strategic act. There are too many important issues at stake to tolerate protest votes. As ugly as the drone war is, it isn't the only issue in the election. I like having a social safety net and Romney/Ryan look poised to shred it. I like Obamacare and would like to see it extended, not killed off.

From my perspective, Obama is superior to Romney on virtually every issue. Romney hasn't given many details on what his foreign policy would look like, but it seems unlikely that he would be any better on civil liberties. Executive power seems to ratchet in one direction absent any checks or balances from Congress or the courts. Plus Romney is generally more hawkish than Obama and is surrounded by the neo-con establishment in exile. War with Iran would be a lot worse than targeted drone strikes (bad as they are).

It also has to be said that Obama's foreign policy is a big climbdown from the unmitigated disaster of the Bush years. Obama ended torture and is winding down the Iraq and Afghanistan occupations. Whatever you might think of Libya it was at least a limited affair. It's no surprise either that the sticky issue has to do with foreign policy. For decades U.S. foreign policy has been something of a bipartisan train wreck of almost constant overseas military presence and actions. There is virtually no constituency in Washington for a more peaceful or restrained foreign policy and domestic policy is typically more important to voters. Those affected by our bad policies can't vote.

Still, Obama's critics typically frame the question as a moral one: when has a president you generally agree with done something so bad that you cannot in good conscience pull the lever?

The internment of Japanese-Americans during WWII is a horrible stain on our history. Should we have therefore dumped FDR in 1944? Does that blemish erase the good that was done by the New Deal? Martin Luther King Jr. was famously agnostic about the Eisenhower-Stevenson presidential race, saying that both parties were bad on civil rights, although he did say he voted for JFK in 1960 and would have publicly endorsed him in 1964 had he lived.

I do sympathize with those who want to wash their hands of the whole thing. The U.S. establishment has decided that we will wage endless war, but always in other peoples backyards. Deaths of innocents seem to have little weight in the DC calculus. Here in Nicaragua we can see that people are still feeling the consequences of that consensus twenty years after the Contra War. It's a hard question and a personal one, obviously, so here are a few thoughts:


For me that adds up to a vote for Obama, which I mailed off several weeks ago. And a commitment to be a pest on foreign policy for the next four years. Vote strategically, act locally.
Posted by t at 1:18 PM No comments: