Have some more music.

This is the latest from Manu Chao and its been bouncing around in my head this week, crowding out some of the Mountain Goats. He's the guy who is stealing back the bit of "world music" that was borrowed by the Talking Heads and the Clash, and more power too him. Even if you haven't heard of him, you've probably heard this or this. This one is 'Rainin in Paradize' and it's a damn catchy song with a great guitar riff (Santana would be proud), and a pretty cool album too (sung in like four or five languages). (If you're curious, he has two other videos for this song, here and here, that are fun too.)

in Zaire, was no good place to be
this world go crazy, it’s an atrocity

in Congo, still no good place to be
them kill me buddy, its a calamity

Taxation: yes. Representation: not so much.

This Sunday we're moving from Arlington into Washington, DC proper. We'll be living in the LeDroit Park neighborhood (or Bloomingdale depending on who you talk to). I'm pretty psyched to be back in the city (I don't think I'm much of a suburbs guy at this point in my life). At the very least it'll cut my commute down by a lot, which should be very nice for when the baby arrives.

View Larger Map
The neighborhood has been described as 'up-and-coming', which seems to mean that for the time being there are more homeless people around than Starbucks. It also means we're most likely participating in (re)-gentrification, which is a little troubling but seemingly hard to avoid these days. Census data for our zip-code (20001 baby!) is available online and it paints an interesting picture. As of the 2000 census, we were 83% black, 8% hispanic, 6% white, 3% asian/PI with 28% poverty rate and 16% unemployment. I wonder what those numbers are now -- especially because the median sales price for homes has nearly tripled since 2000.

So. Interesting. At any rate, it seems like a beautiful and vibrant part of the city. We're near Howard University, the U Street corridor and lots of historic stuff in the Shaw neighborhood. The neighborhood gets a WalkScore of 68 out of 100, which is better than our current place, but nowhere near as walkable as our last apartment in Chicago (which dinged a 94/100).

And yeah, we're trading away our Congressional representation for the thrill of city living. DC remains a constitutional accident with more people than Wyoming, a lot of federal taxes paid but still no votes that count on Capitol Hill. And while everyone seems to think this is totally unfair there's never the political will to do much about it. The most recent stab at compromise (which would add an extra seat in Republican Utah to balance the vote from solidly Democratic DC) got 57 Senators to vote for it, but still died at the hands of a Republican filibuster.

It should be fun. DC as a town has grown on me a lot over the past year. Once you get away from the Mall a real (if somewhat warped) city emerges. Here's to getting to know it better.
Posted by t at 12:35 AM 7 comments:

Email ThisBlogThis!Share to TwitterShare to FacebookShare to Pinterest
Labels: maps

New Band to Obsess About

We saw the Mountain Goats play Thursday night at the Black Cat. A pretty totally awesome show, except that it only lasted a smidge more than an hour, and I think the crowd would've been happy to listen all night.


New favorite band? Maybe so... John Darnielle is primarily a storyteller, so he comes off as kind of a coffee shop songwriter-y type, except that he writes smarter, funnier, more pissed-off lyrics and whales on his poor acoustic guitar so hard it might put you off your latte. For example, they played this one ...


... and we all sang along gleefully. (I hope we all die!) They're funny as They Might Be Giants, literary as Stephin Merritt, angry as Elvis Costello, but with this crazy manic joy about them even when singing about divorce or heavy drinking. They can also be twee and clever and a little bit wistful...


Darnielle has apparently written hundreds of songs as the Mountain Goats since 1991, with many of the first decade recorded (deliberately) on a cheap boom-box and released only on cassette tape. It's only recently that he's consented to go into the studio and put together the more polished stuff you see above. So anyway, they're a fun band with lyrics worth getting lost in.
Posted by t at 12:46 AM 2 comments: 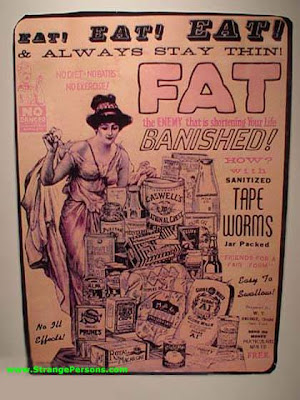 This came through my inbox a few weeks ago along with a bunch of other funny old advertisements, and I thought, "Hey! We used to have that one hanging up in our kitchen when I was a kid!" I remember it from an age when I was not quite old enough to see why it was funny.

Wonder whatever happened to it?
Posted by t at 9:09 PM 3 comments:

(No, this actually isn't a post about global warming.) I've been reading a fair bit about endocrine disruptors lately, and this article in the Guardian caught my eye:

Man-made chemicals blamed as many more girls than boys are born in Arctic
Twice as many girls as boys are being born in some Arctic villages because of high levels of man-made chemicals in the blood of pregnant women, according to scientists from the Arctic Monitoring and Assessment Programme (Amap).

[clip]
In the communities of Greenland and eastern Russia monitored so far, the ratio was found to be two girls to one boy. In one village in Greenland only girls have been born.

The scientists measured the man-made chemicals in women's blood that mimic human hormones and concluded that they were capable of triggering changes in the sex of unborn children in the first three weeks of gestation. The chemicals are carried in the mother's bloodstream through the placenta to the foetus, switching hormones to create girl children.

It's somewhat hard to know what to make of this since the actual study hasn't been peer reviewed or published yet and the authors make a few crazy statements in the article. But it is certainly quite alarming and even somewhat plausible. A few thoughts:

This study may come to nothing -- it's always risky to judge based on a popular media report on an un-released study. Still, while I suppose Jan and Dean might enjoy this situation, the rest of us might want to keep an eye on what we're spewing out into the environment.
Posted by t at 5:14 PM 2 comments: 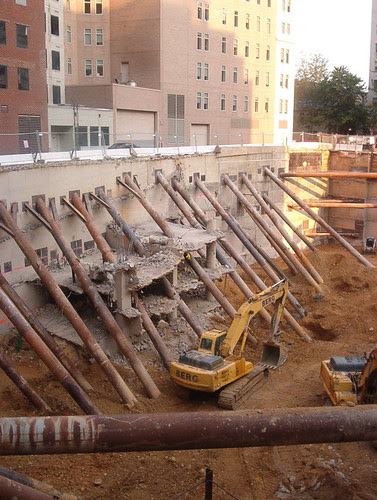 They've been verrry slowly demolishing this building about a half-block from my work. About a year ago, when I started my job, the open pit you see here was an ugly, seventies-style, ten-story building. They started at the top and took it down floor by floor until they finally ended up with a giant hole about negative three stories tall. Apparently, they weren't allowed to just dynamite the thing because it's located just a few blocks from the White House.

Anyway, the weird buttressing posts caught my eye, as did the leftover morsel of underground parking garage still stuck to them.
Posted by t at 8:09 PM 4 comments:

Apparently August 31st was Blog Day. As I understand it, Blog Day is a chance to hype other blogs and get your readers to check out some cool stuff. So, with much delay but no further ado, you should all check out these 5 blogs.
OK, so the point of this exercise was actually to find five new or little known blogs. Since I clearly didn't do that let me at least give props to two friends who have started blogging fairly recently:
Here's to their long and fruitful presence in the blog.
Posted by t at 10:03 PM No comments:

maps (how I love thee)

I can honestly say, thank goodness someone did the research to figure this out. This is a map of which regions of the country generally say 'soda', 'pop' or 'coke' when ordering a soft drink.

This question was quite the hot topic during my first week of college -- and now we have the data! I confess, coming from a strong soda county, I grew up thinking that "pop" was primarily an old-fashioned term from the '50s and earlier -- i.e. I take my baby down to the corner and I buy him a (soda) pop. Apparently, I was very wrong - we're badly outnumbered. The map also clearly shows the nefarious regional influence of the Atlanta-based Coca-Cola company.

Anyway, the map comes courtesy of mapsforus.org, and their hilariously inarticulate spokesperson.

In a somewhat different vein, this map is pretty interesting too (provided you buy their methodology). Perhaps someone should write a memo to the Democrats.
Posted by t at 11:10 PM 4 comments: