This past week has been filled up with travels, first to California for fun and then to Boston for work. At any rate, I have a backlog of stuff to share. 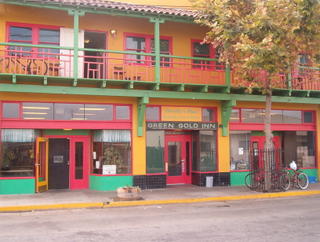 The California voyage was ostensibly to attend my 10 year high school reunion (more on that below), but we also stopped in on our dear friends, Mandy and Mia, at their new base of operations in Salinas. They are living there in community at an inter-faith Catholic worker house. The workers run a day shelter called Dorothy's Place (the colorful building in the picture) which provides two meals a day, showers, a place to rest your feet and a thousand other services for the folks living on Soledad Street (Salinas's Skid Row). Right now the community is small, just Mandy, Mia and another couple who are raising 15-month-old twin boys, but they seem to have great ambitions for building a thriving community dedicated to social justice. 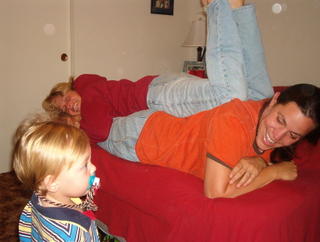 Here's Mandy & Mia instructing one of the twins (I have no idea which!) in the art of silliness. While we were there we helped out with lunch preparation, played with the twins and checked out the community. I met the two of them through co-ops in Chicago and I've always been inspired by their insistence on making social justice and community integral parts of their lives. Conversely, I've always had a lot of respect for the Catholic Worker movement, but I never felt "Catholic enough" to really join in. So I'm intrigued to see how the interfaith nature of their community evolves, and I think Laura Jean and I would be interested in joining them at some point in our future. At any rate, it was great to spend time with them, and since Salinas is only a few hours from Fresno, it is nice to know we'll be able to see them pretty easily whenever we come home. 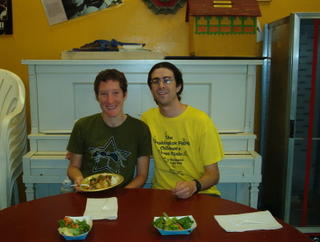 We were also lucky enough to lure Cathy down from the Bay Area and spend some quality time catching up with her lovely self also. Very convenient, one-stop friend-shopping, I must say. 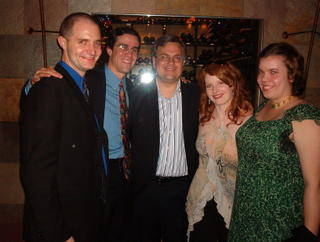 Last Saturday night was the 10 year reunion for the Class of 1995 at Clovis West High School. From right to left in the picture are Laura Jean, Elisabeth, her husband Dan, myself and Aaron. Since Lis is my oldest friend in the world, and Aaron is one of the relative handful of CW-folk I've kept up with, we banded together for the reunion. I have to admit I was a little leery of the whole reunion thing. High school actually became tolerable and even a little fun by the time senior year rolled around, but in general, Buffy has it right: before you understand who you are and what is important to you, high school really can be a minefield of insecurities. Old anxieties aside, it was actually a fairly interesting evening, full of double-takes and surreptitious name-tag glances. There were a several people I hadn't anticipated seeing and was pleasantly surprised to catch up with. In the end, we didn't feel compelled to party until they kicked us out, but we had a pretty good time anyway.
Posted by t at 12:04 AM

Email ThisBlogThis!Share to TwitterShare to FacebookShare to Pinterest
Labels: travel