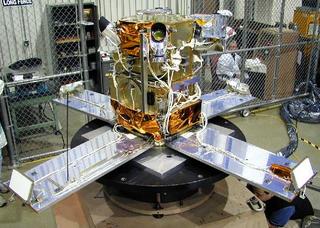 Yesterday was the five-year anniversary of the launch of the High Energy Transient Explorer (HETE-2), the first scientific satellite entirely devoted to the study of Gamma-Ray Bursts (shown here before its launch, obviously). It's hit a few bumps in the road, but in the last few years has made some great discoveries. These have included the localizations of bursts on March 29, 2003, which finally proved the connection between long GRBs and Type Ib/c supernovae, and the short burst of July 9, 2005, which shed light on the nature of short GRBs. An international collaboration led by M.I.T., with help from Japan, France, Los Alamos, Berkeley and a few of us here at U. of Chicago, deserves the credit for keeping HETE running these past five years. To learn more about how HETE works, check out our home page:
http://space.mit.edu/HETE/
Posted by t at 11:03 AM