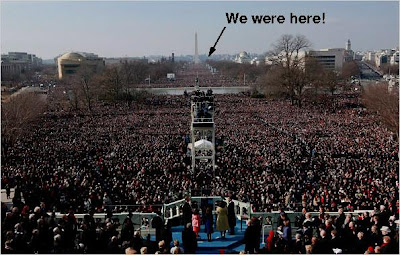 Original photo: NYT
This was our view of Obama's inauguration

We were standing in the freezing cold about 1.5 miles away from the actual swearing-in, watching a jumbotron with a smaller angular diameter than your average iPod - and still it was awesome! From the video you can tell that Obama and Roberts flubbed the actual oath, but at the time I didn't notice, mostly because we couldn't hear all that well.

We bundled up the baby and left the house a little before 10 am. Metro was (of course) having a complete meltdown and train stoppage when we got to the station, but miraculously they cleared it up with not too long a delay (apparently someone fell onto the tracks at Gallery Place, but was uninjured). The train cars were ridiculously crowded. 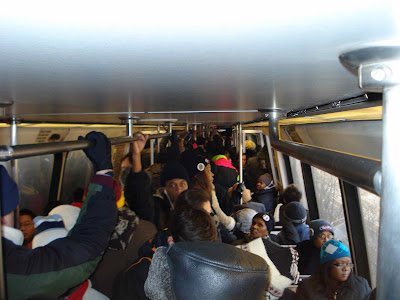 Our first thought was just to get off at Union Station (which is right by the Capitol), but the Post text bulletins warned us not to try to enter the Mall anywhere east of 14th street because the crowd was already backed up. So we took the train all the way to Farragut and walked down 18th street (i.e. on the other side of the White House) and got pretty close to the Washington Monument with really no trouble at all. People as far as the eye could see. 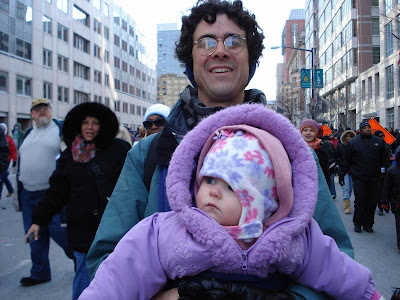 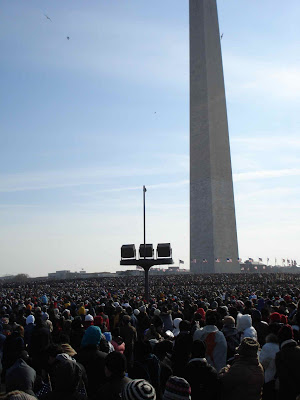 You could tell the crowd was excited but too freezing cold to relax. Thank god the sun was shining. Everyone had that 'waiting for the bus' look to them - happy, but restless. There were boos and cheers as various politicians filed in. The sound was iffy from where we were standing, which is too bad because I wanted to hear Aretha and the piano quartet. 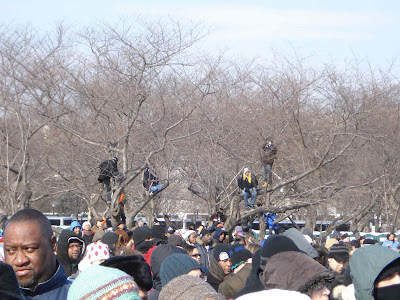 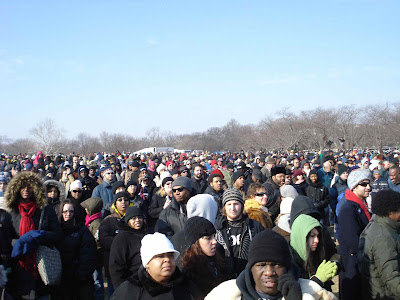 And then the big moment and the crowd went wild. Very cool. 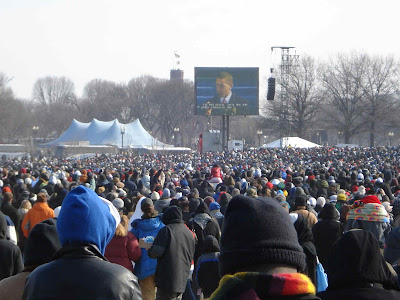 Quinn was getting cold and cranky so we decided to skip out in the middle of Obama's address, and miss the crowds on the train back home. All in all, pretty painless compared to some of the crazy stories we heard later. One other thought: the Obama memorabilia sector of the economy is pretty strong. Here's the picasa album with some more photos.
Posted by t at 7:16 PM