Yesterday morn we ran the Race for the Cure down on the national mall, and even though it started at 8am, the day was hot and humid and shrouded in fog. (The fog burned off after it got up past 99 degrees later that afternoon). Absolutely terrible weather for a run, but still fun--so long as you hydrate properly.

I ran the course, while Laura Jean and Jesse pushed Quinn and Grace in strollers (running the last mile once it spread out enough). (Laura hurt her knee in a kickball-related injury and had to watch from the sidelines.) I started at the back of the runners pack and there were so many people in front of me that I really couldn't run for the first full mile and I was dodging in and out of the crowded pack all the way to the finish line. You can get some idea of the sheer number of people from this picture at the finish: 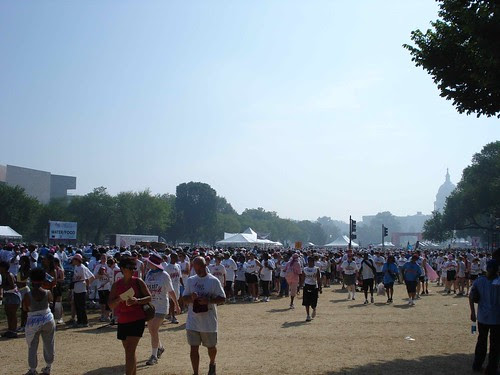 The most fun about these mass events is the people watching and tracking the swirl of subcultures. It is amazing to see such a broad swath of America represented at this race--all colors, ethnicities, ages, genders, regions, orientations--a sure sign that breast cancer intrudes on far too many lives. T-shirts representing teams from all types of jobs, families galore, homemade testaments to loved ones, pink shirts heralding cancer survivors. (Two of the more amusing are the ever-present "Save the Ta-Tas" shirts, and clever, homemade versions proclaiming "Save Second Base".) 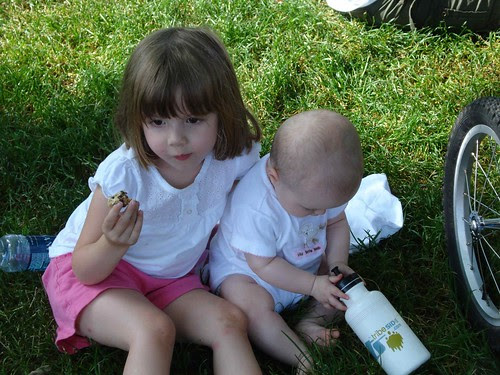 It was also great to see family. Above Grace is giving Quinn some big-cousin-ly support. And here's Team Torgerson attempting to cool off in the shade after the race. 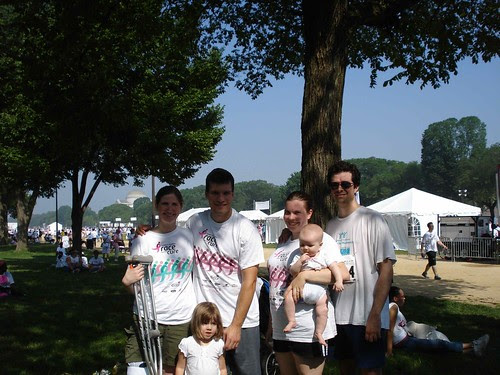