There are 1,243 currently listed Superfund sites in the United States and 61 proposed sites that haven't been listed yet. These sites represent the worst toxic waste disasters in the United States, and have thus been singled out for special attention. Since 1980, only 319 sites have been cleaned up sufficiently to be deleted from the Superfund list. The map below contains all 1,623 sites. New Jersey has the most with 115 current and 3 proposed sites. 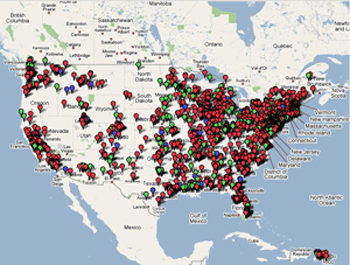 The Center for Public Integrity has a great site where you can search the map above to easily find the sites in your neighborhood. For what its worth, the EPA website has two similar maps here and here that I found harder to use, but did cough up some more detailed information. For example, here are the four Superfund sites in my hometown of Fresno, CA. 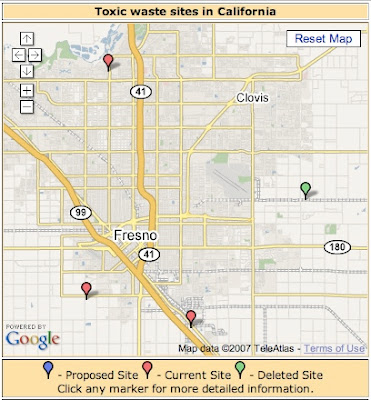 According to the EPA, at least 114 Superfund sites pose immediate health risks to nearby residents -- makes me wonder how many of those people even know that they have a toxic waste site in their neighborhood?

The CPI report alleges that the rate of cleanup of superfund sites has slowed significantly under the Bush administration. Critics ascribe this slowdown to budget cuts and a "lack of political will" at the Bush EPA; in their defense, Bush officials claim this is because the remaining sites are the tough ones, and that the "low-hanging fruit" have already been cleaned-up. CPI also provides a run-down on the 100 worst offenders - including the federal government and infamous polluters like General Electric.

Anyway, good reading. Via the Pump Handle.
Posted by t at 8:50 PM

Hey Tim,
I can see from your map of Fresno that they still have not found QP&D's shop site yet!!
Great BloG!!
Joe