Here are a handful of my pictures from my late-November trip to Mexico City -- posted for your pleasure a mere 4 months late. The rest of the pics can be found here (snapfish login required). 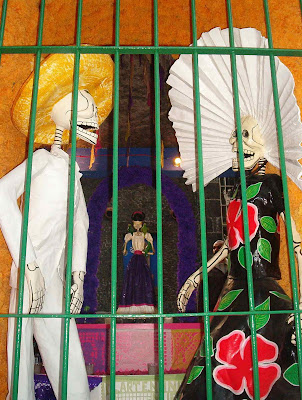 The trip was a ton of fun and Mexico City is an amazing, endless city -- both beautiful and real at the same time. (Above are skeletons from the Frida Kahlo "Blue House" museum.) 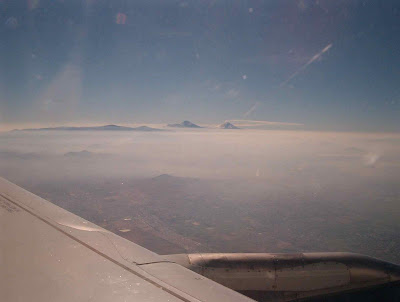 Flying into Mexico City we could see Popocatepetl and Iztaccíhuatl, the legendary twin volcanoes overlooking the Valley of Mexico... 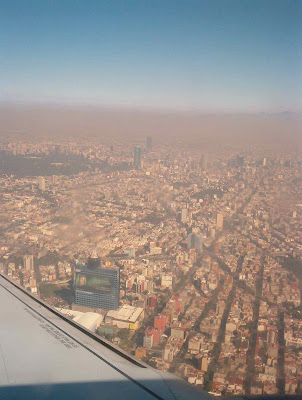 ... however, most of the city was covered in a thick layer of brown haze. The metropolitan area has nearly 20 million people (3rd largest in the world behind Seoul and Tokyo) and a terrible air pollution problem. 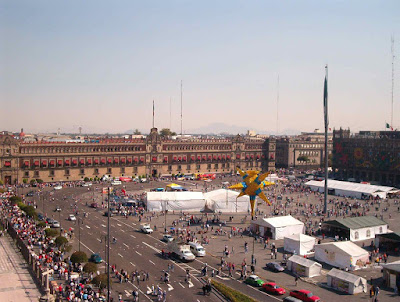 My old college roommate, Julie who has been living in Mexico for six years now, met me at the airport and we had lunch overlooking the Zocalo, the central square of the city. Here, within yards of each other, you can find the city's Aztec past at the Templo Mayor, the legacy of Spanish colonialism in the Metropolitan Cathedral, and the National Palace, the hub of modern Mexico's government. In other words, tourist central. 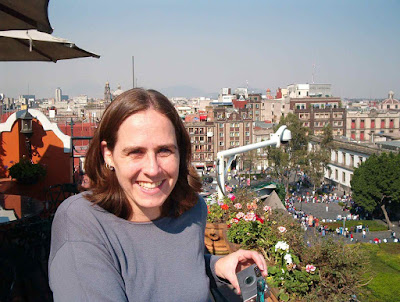 Julie, overseeing the hubbub below. 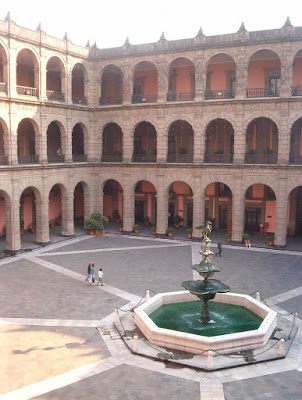 A peaceful courtyard at the National Palace. 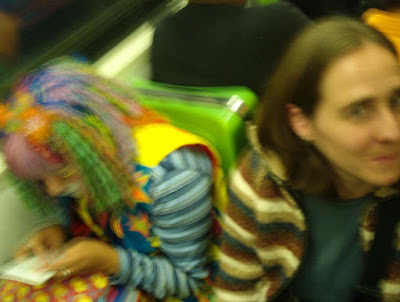 Julie riding the subway with a really awesome clown. 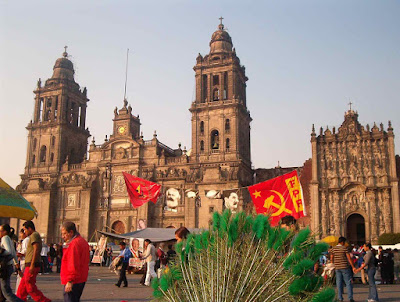 Here's the Metropolitan Cathedral, looming over some Communist flags (yep that's Marx in Stalin in the photos) and peacock feathers used by a group of traditional dancers. 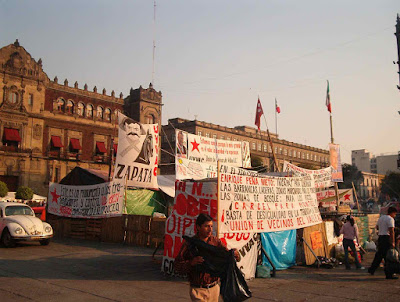 The Zocalo is also home to all manner of political protests, and Mexican politics have been pretty interesting lately. Protest encampments lined the streets to draw attention to a variety of issues: from the bitterly disputed 2006 presidential election to the current uprising in Oaxaca to the continuing relevance of the Zapatista movement in Mexican politics. 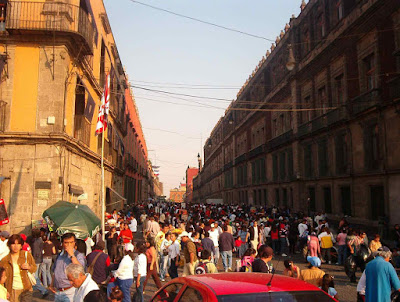 Thousands of street vendors selling anything you could want. 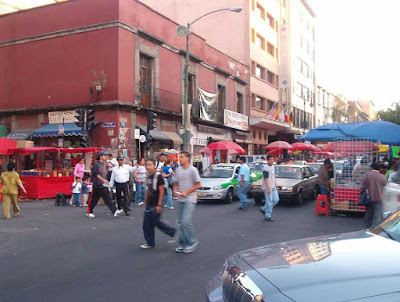 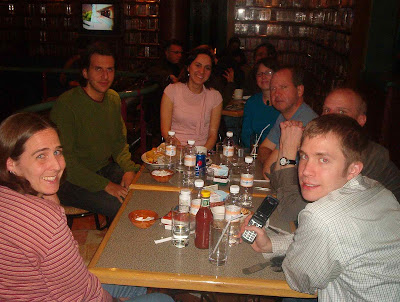 The reason for the trip is that Starflight, the 3-d astronomy museum exhibit I helped pull together, was being shown at the Laboratorio Arte Alameda, and we were all invited down to help with the installation and attend the opening. 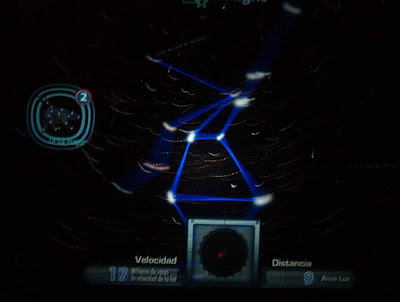 Here we have Starflight in action. The highlight of the trip for me was speaking (in my halting Spanish and their halting English) with the folks who came to opening. People generally thought it was pretty cool and we had some fun conversations -- there's nothing quite like describing abstract astronomical concepts in a second language to a group of artists. 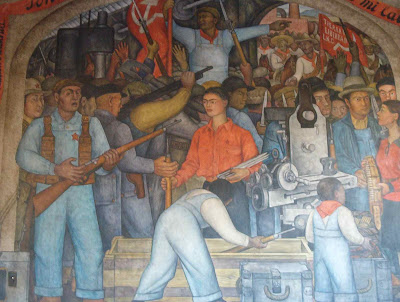 One great thing about Mexico are the literally hundreds of gorgeous Diego Rivera murals dotting the city. Above is El Arsenal, prominently featuring Frida Kahlo as a worker... 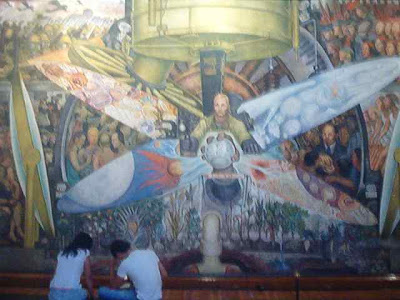 ... while this is Man, Controller of the Universe, mostly famous because the original was supposed to have been painted at the Rockefeller Center in New York, but was destroyed by John Rockefeller because of its explicit pro-Communist message (which was the subject of the movie, Cradle Will Rock). 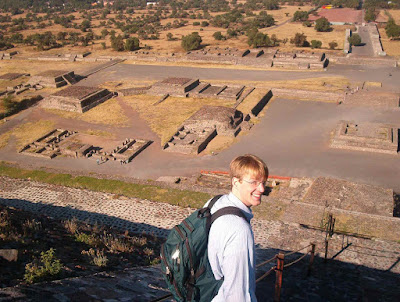 By far the coolest things I saw in Mexico were the pyramids at the pre-Aztec city of Teotihuacan. Keith and I grabbed an early morning bus out to the site (about an hour outside of D.F.) and we mostly had the pyramids to ourselves for several hours. This is Keith descending the Pyramid of the Sun. 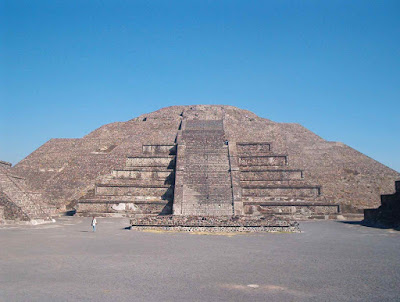 The smaller, but more ornate, Pyramid of the Moon. 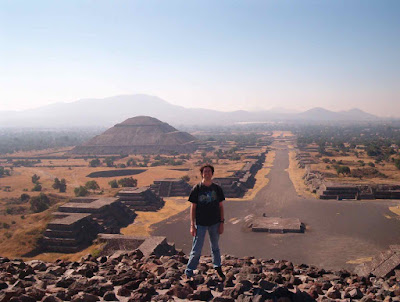 Me on top of the Pyramid of the Moon. 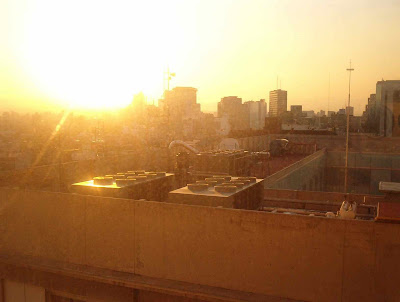 A beautiful (if smoggy) sunset from my hotel room. 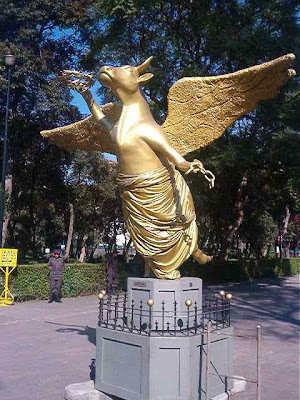 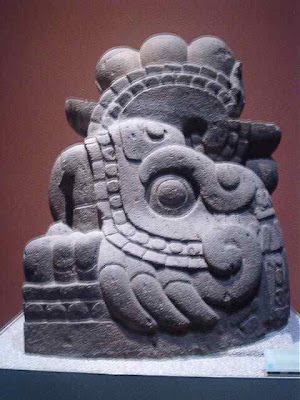 Sadly, I only had a few hours to zoom through the fabulous National Museum of Anthropology, when I bet you really need a few months to do it justice. 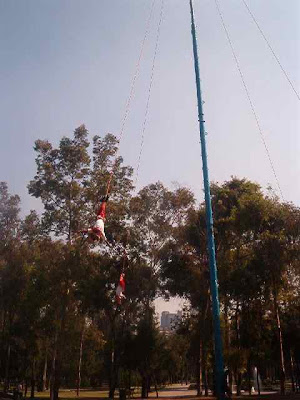 These guys are Totonac indians performing the voladores rite, which is a really cool, if trippy, native tradition where they hang upside down and rotate around while playing music. The rumor I heard was that the Spaniards brutally stamped out many aspects of Aztec culture, but they let this one survive because they incorrectly thought it wasn't religious. 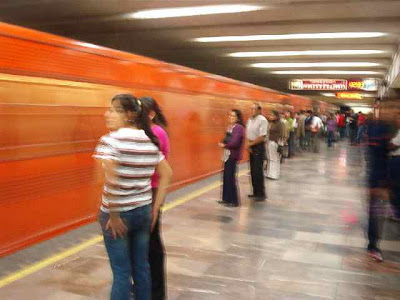 And lastly, I have to say D.F. has a subway system that is both one of the most extensive I've ever seen (outside NYC) and completely overwhelmed by the number of people who use it daily.

Hi, I'm updating the article on Wikipedia about Tina Modotti, and need a non-copyright image of Diego Rivera's In the Arsenal to add to the article (Tina is the figure on the right) would you be agreeable to my using your picture? If so please contact my by 'talk' in Wikipedia my user name on there is Green ribbon, or email me, paul_moorhouse@hotmail.com