This past Friday we gave our final presentations for my museum internship. It was basically a chance to show off our work to a handful of museum bigwigs -- it actually went pretty well, for the most part.

My group worked on two interactive computer exhibits. One exhibit (that I didn't work on very much) let people physically play with a virtual sound wave by moving an IR wand -- faster wand movement == smaller wavelength == higher frequency sound, and vice versa. The exhibit I worked primarily on (called 'StarFlight') allows people to fly through a 3D virtual reality model of our local universe with a video game controller.

For the most part it is very, very difficult to determine distances to astronomical objects -- in many ways, the problem of distance has been the central problem in astronomy for centuries now (and hopefully the topic of a future blog post). As a result, for many objects on the sky, we have very good 2D information, but only a rough estimate of the 3rd coordinate of radial distance. Inside a comparatively small radius about our sun, accurate distances to other stars in our galaxy can be determined through stellar parallax (which measures the apparent shift in positions of stars as the Earth goes around the Sun). The gold standard for this sort of measurement comes from the European Hipparcos satellite, which measured the parallaxes (and hence the distance to) nearly 120,000 of our closest stellar neighbors.

But more importantly, for our purposes, this dataset gives us a full 3D picture of our local corner of the Milky Way galaxy. Our exhibit lets the user "fly" through this cloud of stars just like a video game. Using this data, it's fun to consider what familiar constellations look like from different vantage points. For example, my sign is Scorpio, and this is what the constellation Scorpius looks like from Earth: 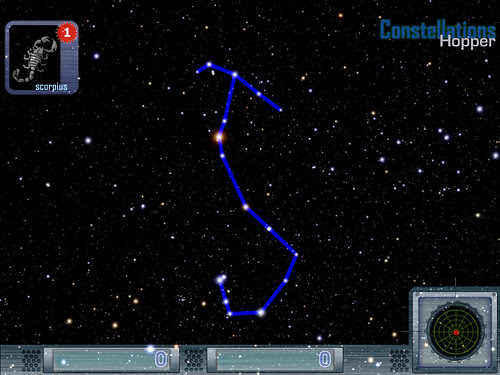 But when we fly off to one side and take a look it assumes this crazy zig-zag shape because some stars are really close to our sun and others are really far away. Our sun is represented by the tiny white circle on the far left that all the blue lines are "pointing to". 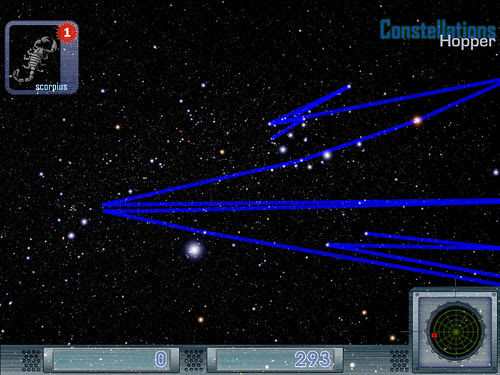 The basic implementation of the program is a mix between free form exploring of the stars with the video game controller, and a more guided tour of a few famous constellations, complete with narration explaining astronomical concepts and giving the mythological stories behind the shape. We also have an animated intro that puts everything in context by blasting off from downtown Chicago (Adler Planetarium actually) and launching us into the solar system, and finally out into the sea of nearby stars. The program can run on anything from a laptop screen (Mac, Win, Linux) to a GeoWall (a relatively inexpensive stereo 3D system that many museums use).


Implementing this exhibit took the combined efforts of many people, and it was aided infinitely by the existence of the very cool and super-useful electro application development environment. We will be distributing "StarFlight" on the web (link TBD) once we iron out a few more kinks, but since we based our program on a simpler implementation of the Hipparcos catalog (the 'total perspective vortex') that comes bundled with the electro download, you can try it yourself right away if you like. As a teaser here's an image of 'vortex' running on the 100-megapixel, 11x5 tiled display at the Electronics Visualization Lab at UIC. (Tangent: Can I just say EVL has some pretty impressive toys? In addition to the tiled display, we got to play with some of their varrier displays, which use various forms of eye- and head-tracking to create a personal stereoscopic 3D display without the use of annoying stereo glasses, which always give me a headache. They have it set up to do 3D video conferencing, which is a little freaky.)

So anyway, perhaps this exhibit will be effective in teaching a few basic astronomy ideas (stars are far away, but get brighter when you get close to them), and hopefully it will have a high 'cool factor' to hook visitors into playing with it. Participating in this project has given me nothing but respect for people who design human-computer interactions and museum exhibits. It is just not easy to design an object to do your communicating for you. With luck, 'StarFlight' will end up playing at SciTech Hands-On Museum in Aurora, IL (and maybe somewhere else too), and at any rate, was a lot of fun to make.
Posted by t at 12:12 PM