As I was standing atop Starved Rock this past weekend, I had a revelation that is probably boring and obvious to a lot of locals, but I really hadn't understood how it worked until an informational sign enlightened me. This is the problem: the watershed in the Chicago area is really strange. For example, the water in Lake Michigan (and the entire Great Lakes Basin) flows to the Atlantic Ocean via the St. Lawrence seaway. But, most of Illinois flows to the Mississippi River and then to the Gulf of Mexico. 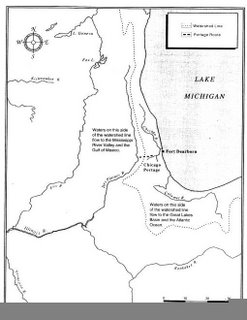 As this map shows, the line demarking these two watersheds is just outside Chicago and rings Lake Michigan. And it's not like there's a great mountain ridge running along that dotted line - it's just prairie, swamp and dunes (or nowadays, suburbs). In fact the difference is so slight that canal projects in the 1800s were able to reverse the flow of the Chicago River so it flows out of Lake Michigan (and hence to the Mississippi as well). I mean, everyone always jokes about how the Chicago River goes the wrong way, but I never understood until now what that means. Does anyone else think it's strange that the watershed line is so close to the lakeshore?

In a sense, this geographic burp is kind of why Chicago is such an important city. Ever since Jolliet and Marquette, people had been looking for a passage between the Great Lakes and the Mississippi so they could ship things easier to different places. Just outside Chicago was where the portage was shortest, and once the canals were dug the city grew rich on the shipping trade. Now it all makes sense!

There's an excellent overview of all this to be found here (which is also where I stole the map image from; please don't sue me).
Posted by t at 12:08 AM