We recently bought a new tent, and this weekend we tried it out at Starved Rock State Park, which is this really lovely little park halfway to Iowa along the Illinois River. 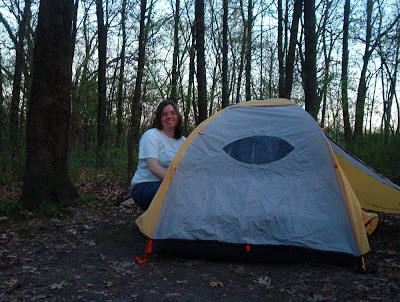 The campground was pretty gourmet as far as car-camping goes, and not too crowded yet. I can imagine the place rivals downtown Manhattan come July. Lots of RVs and kids on bikes. We were psyched to have a campfire, and the site we picked even had some leftover firewood. Yet, having forgotten a lighter, we lacked the technology to actually make fire. Hmm. We had seen signs advertising firewood as we entered the campground "Jack's Firewood and Stuff", so we set off to find Jack. Turns out, Jack doesn't run a store but is this really nice old guy who lives on this ridiculously picturesque country road and who sells firewood out of his front yard for $5 a stack (leave the cash in the thermos, thanks!). Since we didn't need any firewood, he loaned us matches and threw in some old newspapers. Super nice guy. And now we had a campfire. 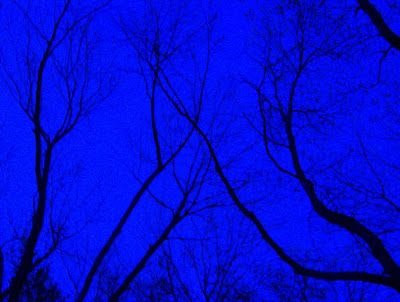 And when the sun went down, the stars came out. Now I've been spending the past several months designing a museum exhibit on constellations and the local stars, but I realized that I hadn't seen actual stars in months. And the night was clear and beautiful - perfect for stargazing. 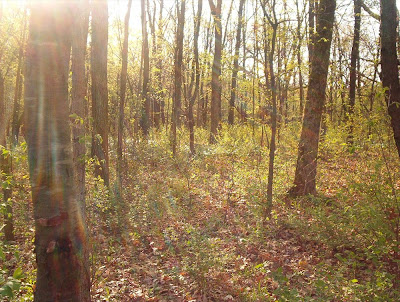 The next morning it was warm and sunny, with the first signs of the woods coming alive for spring. 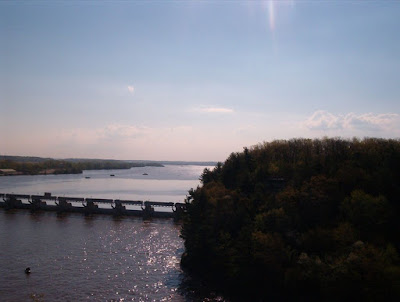 This is the view of the Illinois River from the top of Starved Rock, which is a layer-cake rock outcropping right above the river. Legend has it in the 1760's an Illiniwek war-party was besieged on the rock by Ottawa warriors avenging the killing of their chief, Pontiac. The Illini refused to surrender and they all starved to death. The park has had the good taste to not put a snack shop on the top. 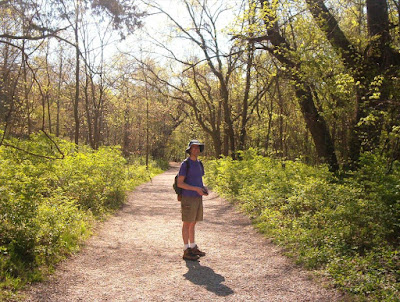 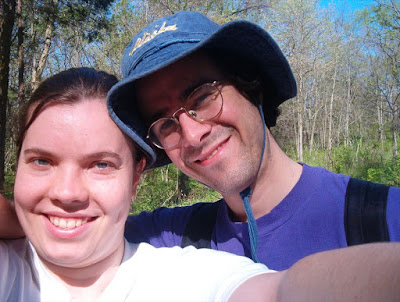 Here's some pictures of us hiking around. 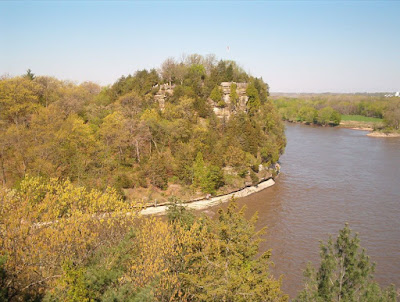 A view of Starved Rock from "Lover's Leap" (another cheerful story behind that one, I'm sure). 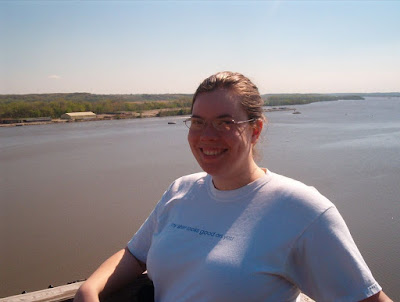 Here's Laura Jean looking cute. The watershed region of the Illinois River is pretty interesting in itself (I'll probably devote another post to it). The dam prevents this part of the river from freezing solid, and so bald eagles come to the park in the winter to fish. We didn't see any, but we did watch a barge go through the locks, which was kinda cool. 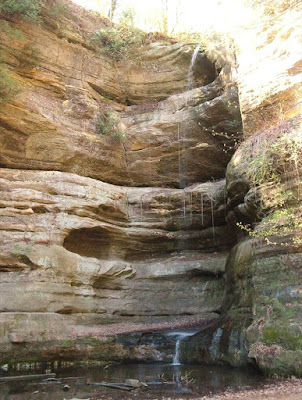 The park is mostly twisting canyons and waterfalls, which is weird for Illinois. I wouldn't really have guessed that there were things high enough for water to fall off of in this state, but this canyon was deep and cool and very peaceful, with a great waterfall back in the nook. 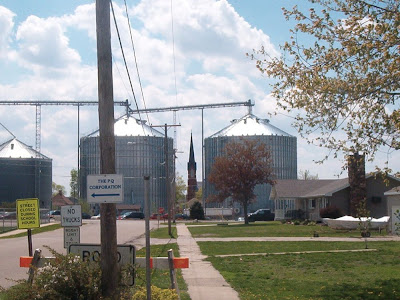 The nearby town of Utica is pretty adorable as well; 1000 people, nearly all of them proprietors of tiny shops or cafes along the Main Street. The vision of a church steeple perfectly framed by two grain silos is what greets you as soon as you enter the town from the interstate. Perfect.
Posted by t at 11:01 AM