I've been thinking about the SwiftHack scandal, that frothy souffle of messenger-shooting that has been whipped up on the eve of the Copenhagen climate negotiations. As I'm sure everyone has read, the computers of the University of East Anglia were hacked and many years of e-mails between the world's top climate scientists were posted on the internet to great hullaballoo.

The intertubes are clogged with analysis of the incident so I won't add more, but scientifically speaking, there doesn't seem to be a smoking gun here (although some of the FOIA-related e-mails are troubling from an open-government perspective). Yet, as a media-driven political scandal, it seems to have legs. Chris Mooney is even worried that it will seriously damage the credibility of climate science.

Part of this persistence is undoubtedly due to the widening partisan gap in perceptions on climate change science. But the fact that climate science is tough for your average layperson to viscerally relate to is undoubtedly a key underlying factor. Global warming is a slow-moving crisis that you can't really understand without wading into scientific studies -- and that requires "trusting" experts rather than your own eyes. For example, Matt Yglesias makes a good point:

The choice of a Scandinavian capital in December is in some ways unfortunate since it’s bound to give rise to some scenario in which it’s very cold one day and this “proves” to Matt Drudge that climate change is fake.

And not just Drudge! I would guess that many well-meaning people are honestly convinced, one way or other, by a particularly memorable hot day or extended cold snap, or their own local experiences. This instinct is totally natural, but of course the whole idea of science is to move beyond supposedly "obvious" first impressions. 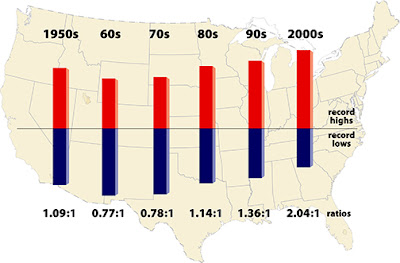 Might be worth mentioning next time someone recalls a cold day as evidence of global cooling.
Posted by t at 7:50 PM