For work, I often check in on the latest from the climate change skeptic/denier/contrarian camps. Since I spent several hours this week reading blogs and reports of that ilk, you will now be subjected to a rant. Sorry bout that.

<rant>
I'm not a climate scientist by any stretch, but I've become pretty familiar with most of the climate skeptic talking points -- and why they're wrong (or technically correct but off-point). I know about the sunspots and the water vapor and the Urban Heat Island effect. I've read a bit on the hockey stick and the British vineyards. For the most part this is all kind of annoying but basically OK -- healthy skepticism yadda yadda yadda -- so long as it doesn't slow down meaningful policies (which, unfortunately, it is).

Anyway the dumbest skeptic meme by far has got to be the whole "global cooling since 1998" thing. I mean, honestly? Tamino at Open Mind has a great breakdown of why this is just insane. The key plot showing the global average temperature trend (GISS data) is stolen from that post. 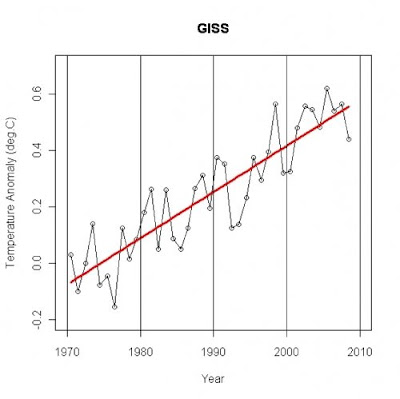 On one level, it's an honest mistake. In all these temperature series the year 1998 is either the first or second hottest year on record (sometimes following 2005, as it does with this data) thanks to an unusually strong El Niño that year. So if you look at 1998 and the latest data point, you might think, whoa, its gotten a tad chillier in the last decade!

But if you think about it for a second, you see that the average temperature varies quite a bit from year to year -- and yet the trend over many years is consistently and significantly upward. This is because the climate responds to increased CO2 on a comparatively long timescale, but short term weather variations will drive the temperature slightly up or slightly down year to year. Next year, random noise will likely drive the average temperature back up again. If global warming had actually leveled off or declined, it would be at least a few decades before we could say so with confidence.

In any scientific field, over-interpreting a noisy data set is a big no-no. If instead you add in a little cherry picking by taking the hottest year as your starting point then you've got yourself some industrial grade misinformation.

Which is why I always respond to this argument as a red-flag of bad-faith argumentation, particularly when it is made by people from a technical background. Stop fooling yourself: show the whole data set, fit a curve to it and figure out the error bars on your parameters. And yet... you see it all over the place. Here (Watt). And here (Pielke Sr). And here (George Will).
</rant>

Sigh. I guess this one irks me particularly since I was over-exposed to noisy time-series data sets as a child. OK. I'm done now.

"I was over-exposed to noisy time-series data sets as a child."

Really? What on earth are you referring to?

PS
Did you read that El Nino is lurking in the Pacific this year.

ha. sorry, trying too hard to be clever.

I was referring to grad school where I spent many many hours staring at GRB lightcurves (like this one). Plotting them, background subtracting them, smoothing them, extracting other quantities from them, etc.

Oo, fun with signal processing! I do the same stuff, but to different sorts of data.

Thanks for the links to climate change info. I was raised with all of those myths, and systematic debunking is very handy to me.

Laughing! Wow, I'm getting literal in my old age. Sounds like someone we know...who is it...who is it? Oh yeah, MOM! Love you, mom.

Hi Heather - yay signal processing! I'm sure you are processing much more important signals than I was.

Glad to provide the links - there are a lot of interesting issues there. I wish the skeptics were right, but I fear they're wrong.