When all you have is a hammer, everything starts to look like a nail.

When it comes to foreign policy, George Bush only has one tool: the largest, shiniest, most expensive hammer the world has ever seen. A hammer so powerful that no nail has ever been able to withstand its force. Unfortunately, he keeps trying to use this hammer to reprogram computers -- with predictable results.

Consider: Iraq is a huge mess. Our invasion and occupation has resulted in hundreds of thousands of deaths, touched off a civil war, destabilized the region and utterly alienated most of the world. But I have a great idea, why don't we ... keep doing the exact same thing as before but with more troops! We'll call it a surge! That should work great!

Consider: Iran is (maybe) trying to create nuclear weapons and is (maybe) supplying arms to Shia militias in Iraq. That sure sucks! (Now we don't actually have any hard evidence of this, but, hey that's never stopped us before...) I know, why don't we ... drop some bombs on them! I'm sure that won't backfire and create more hatred towards the US! What could possibly go wrong?

Sarcasm aside, military might almost never triumphs over committed popular resistance (just ask any former colonial power). Our involvement is not just self-interested and destructive, it's also making things worse with each passing day. Of course, there are some things that we Americans could do to help create a better future there -- but they're long term stuff like (1) stop buying oil, (2) push for a serious solution to the Israeli-Palestinian conflict, (3) fund grassroots programs to improve educational and health access for women, and (4) I don't know, maybe stop supporting horrible dictators in the first place. This is the work of a generation.

In the short term: the time has come to leave. Our troops simply shouldn't be policing a civil war and it is time to bring them home. The American people support troop withdrawals -- heck even active duty soldiers are skeptical of the surge -- and the Democrats are searching for ways to make it happen. The fate of the Middle East ultimately rests in the hands of the people who live there -- they'll figure it out much faster than Bush will. 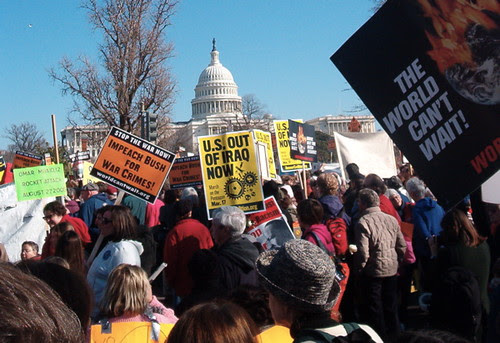 This picture is from last month's anti-war rally here in DC. The four-year anniversary of the war is coming up this month...
Posted by t at 10:18 PM