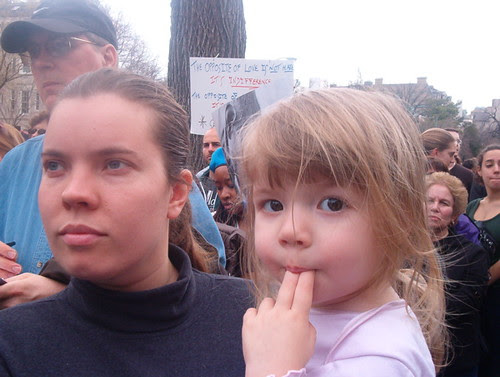 Here's Laura Jean holding our 2-year-old niece Grace, who was attending her first protest yesterday. In honor of Martin Luther King we came to the Save Darfur rally outside the Sudanese Embassy. 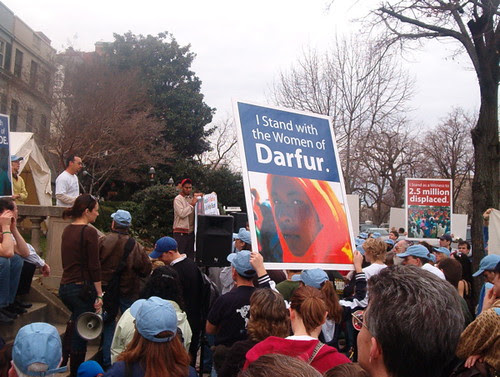 As I've said before, the Save Darfur movement sometimes strikes me as a little odd because its organizers and supporters are clearly passionate but often don't provide a deeper analysis as to why genocide occurs or what systematic things we can do to stop future atrocities. Which is not to say it's not a timely and deeply important cause to take up -- clearly, it's better to act than endlessly ponder political theories, especially when quick action can save lives. But it will be interesting to see where the energy goes once confronted with either victory or continued apathy.

And really, this particular rally was far better than others at drawing the important connections between war and racism and genocide. Several of the excellent speakers drew connections to Dr. King's radical rejection of the Vietnam war and Rep. Tom Lantos (the only living Holocaust survivor in Congress) announced plans to hold hearings on the issue. May they be heard.
Posted by t at 9:15 PM

It's good to hear that congress will finally hold some hearings, at least. It'll show that our government isn't completely blind to the situation there.

Your niece is the youngest protester I've ever seen. Awesome.