Win some. Lose some.

The bad news is that the Kansas school board voted to approve new science curriculum standards that challenge evolution and support intelligent design (ID). The good news is that the school board members in Pennsylvania who tried the same thing in Dover (site of the on-going lawsuit against ID) were resoundingly voted out of office in favor of a pro-science slate. 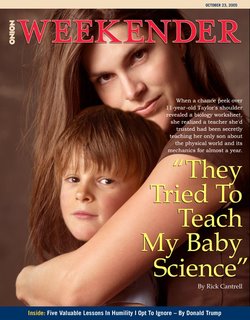 What struck me most about these articles was how much the anti-evolution advocates have adopted the language of science in the service of a direct assault on the principles of science. There's just something deviously brilliant in adopting the mantle of "intellectual honesty" and "open debate", all the while leading kids toward adopting their pre-ordained conclusion. The IDers are smart and they know that actual scientists have a hard time rebuting the idea of an open debate.

It's true that there should be no sacred cows in science. This is a core value held by almost all scientists, and in practice there are few ideas that are not subject to speculation, review and criticism. But science is not just about being open to alternate ideas (however wacky), it is also about making rational, real-life decisions based on the evidence. The scientific process always involves judging between competing models. At the end of the day, you sometimes have to make a decision about which drug to administer to a patient, or which design of an airplane wing to implement. The poverty of the ID argument is that it has nothing to say about any of this. And at the end of the day, evolution is one of the most well-tested theories we have; it is the bedrock of modern biology.

The most charitable thing I could say about ID is that it belongs in a philosophy or theology classroom (although I don't think it works as a very compelling theology either, being essentially a rerun of the old God in the Gaps argument). But I'm old-fashioned. I tend to think you should teach science in science class, and Lord knows there's never enough time to cover everything worthwhile in the course of a school year, even without wasting time discussing the latest political cause of the religious right.

Another funny from the article was from the guy who runs the Intelligent Design Network who said that promoting ID in the classroom would "make science education interesting to students rather than boring." If that doesn't sound like a focus-grouped soundbite, I don't know what does. It's all about creating a brand: ID is fun and rad, while science is a boring subject that only the nerds enjoy. What a good message to be giving our kids.

The headlines make me mad. If I had kids attending Kansas public schools, I would be furious.
Posted by t at 12:36 PM

That Dover story is awesome.

By the way, Plate Tectonics is just a theory. There are several gaps in it. I mean, what's with the volcanoes that exist in places other than plate boundaries? You're going to tell me they are caused by hot spots? Please. An intelligent designer made them.