Last Friday, the Wage Peace group brought a traveling exhibit called Eyes Wide Open to campus to illustrate the costs of the Iraq war. They arrayed 79 pairs of boots in the quad honoring the 79 casualties from Illinois, some adorned with flags and photos. There was also circle of childrens' shoes memorializing the Iraqi civilians who have died in the conflicts (which credible reports have numbered at 20,000 to 30,000). The exhibit is a project of the Quaker pacifist group, the American Friends Service Committee, which has a long history of opposition to war. 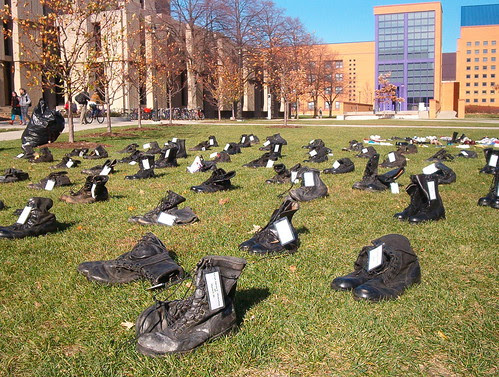 The exhibit also emphasized that the Cost of War has reached more than $220 billion dollars (with no end in sight). The National Priorities Project emphasizes that the money spent on the conflict could have been used to fund any one of the following:
29 million more children enrolled in Head Start
full health insurance for 132 million children
nearly 4 million public school teachers hired
nearly 11 million four-year college scholarships
nearly 2 million housing units
9 years of fully-funded global anti-hunger programs
22 years of fully-funded global AIDS programs
basic immunizations for every child in the world for the next 73 years.

I'm a strong opponent of this war, but I wouldn't exactly call myself a pacifist. I suppose that violence is necessary in certain situations. But behind the video-game media reports, the pundits debating the reasons for war, the important men making speeches, I think the pacifists understand better than most of us this key fact: war means death for the "deserving" and the "undeserving" alike (whatever those terms mean). I wish I knew better what to do with this knowledge.
Posted by t at 5:24 PM

yup.
some comfort in Steven Colbert's... "do you know what you can buy for 100 billion dollars? 1/3 of a war." maybe between the Quakers, late night comedy and your blog more and more people will begin to figure out this war=death and waste part. you gotta hope.