Well, it's been almost two months since my trip to Warsaw, Poland, so I figure it's about time... 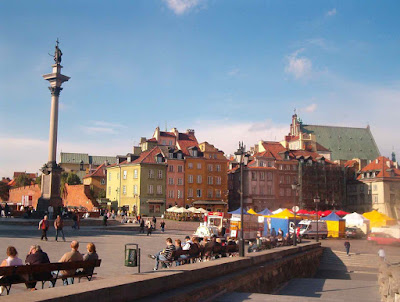 For most of my trip, it was rainy and grey, which somewhat dampened the beauty of the city. But one day in the middle, the sun came out and Warsaw glistened. The above picture is of Zamkowy Plaza in the Old Town, amid the tourists and vendors. 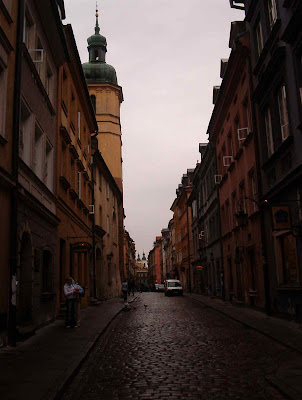 The Old Town is actually a misnomer. The entire city center was completely destroyed in World War II. And I mean, literally reduced to a pile of rubble four feet high. The Old Town that exists today was painstakingly recreated after the war from old pictures and architectural plans. 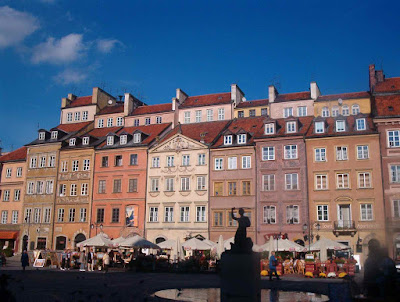 This is the central square of the old town, the Stare Miasto. It is lined with outdoor restaurants and has a similar feel to parts of Italy I've been too. Tourist central -- although this late in the season the tourists were mostly schoolchildren and other Poles. 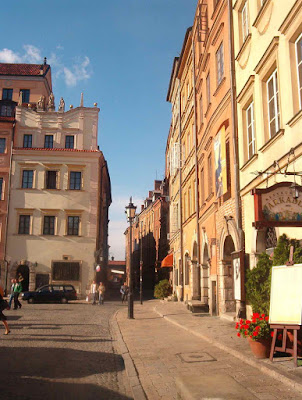 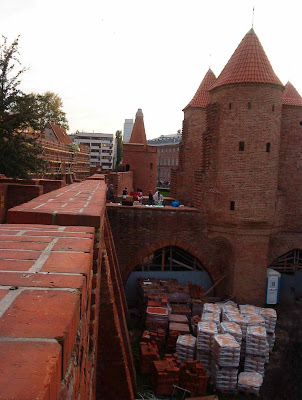 Still, the Old Town does have a certain medieval charm to it, even if it does seem a little too scrubbed clean at times. 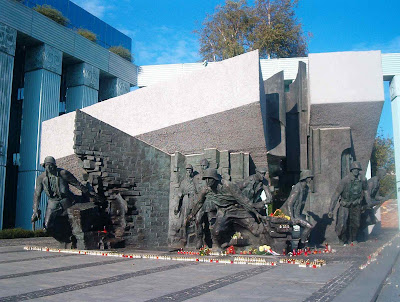 The rest of Warsaw is filled with reminders of the city's tragic history. Poland has had a rough couple of centuries, what with being stuck between Germany and Russia. This is a memorial to the 1943 Warsaw uprising, where the Polish resistance fought back against the Nazi occupiers. The rebellion was brutally put down while the Soviet army watched from the eastern bank of the Vistula. The attempt by many of the resistance fighters to escape through the city's sewer system is depicted in this sculpture. Most were killed. 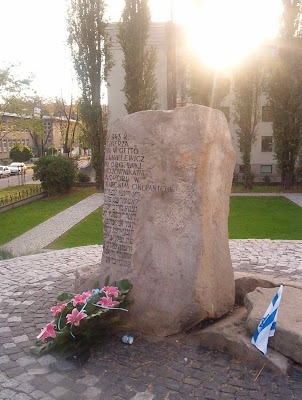 The previous year, 1942, saw the extermination of the Warsaw Ghetto by the Nazis. A series of memorials to this event dot the city, although the ghetto neighborhood itself has been completely replaced by new development. This cairn marks the site of the bunker where the Jewish resistance forces made their last stand. 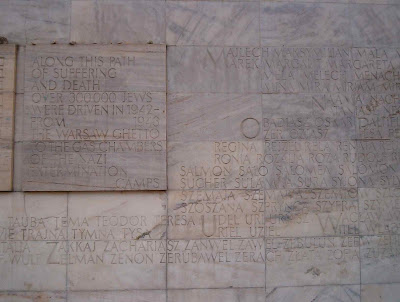 A wall bearing hundreds of Jewish first names marks the train station where 300,000 Warsaw Jews were shipped off to the concentration camps. 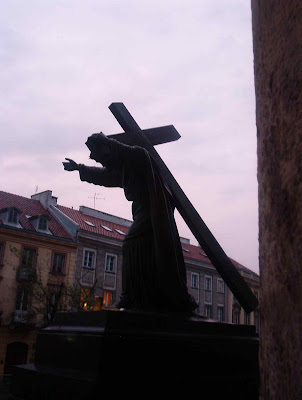 There's a famous photograph of this statue standing among the rubble - it's still there, surrounded now by a thriving city. 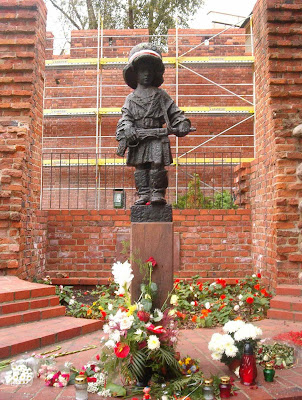 This statue memorializes the many children, some as young as 8 years old, who joined the Polish Resistance. As with all of these memorials, people seem to leave flowers and candles continually. History is not so distant here. 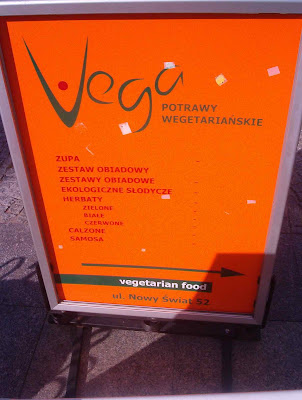 On a happier note, I was able to find one of the few vegetarian restaurants in the city. Very yummy. I was able to make almost no headway on the language while there, although many people spoke English (especially in the tourist areas). Otherwise, I got a lot of practice communicating through gestures and grunting. 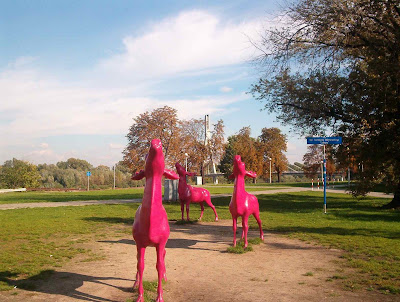 Purple deer baying at the moon. Of course. 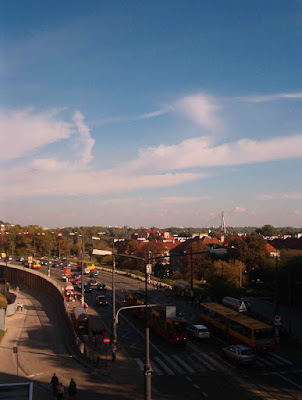 A nice view of the bridge to the east side of the Vistula. Apart from the touristy downtown, Warsaw projects itself as a solid, working city full of real people doing real things. Think Chicago. 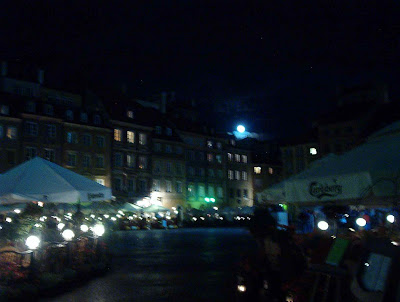 Here's the Stare Miasto under a full moon. 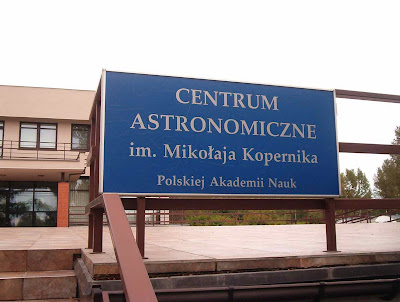 Oh yes -- the reason why I went. My advisor offered to have me give a summary talk about the HETE-2 mission in his stead at a conference hosted by the Copernicus Center. The conference was intended to strengthen collaborations between French and Polish astronomers studying GRBs. It seemed a little odd to me that the talks were entirely in English, even though there was only one other native English speaker attending. The conference was very good, although it may be the last GRB meeting I ever attend... 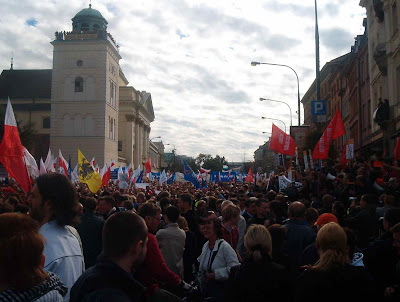 One afternoon while seeing the sights I stumbled into a fairly large political rally/march that had overtaken the downtown. It was fascinating to witness such a rally and yet understand not a word being said. It was fairly clear that at least one of the march leaders was a bona fide national celebrity. Even the cops were snapping photos as he passed. A little internet research later revealed that the march was for one of the center-right parties. 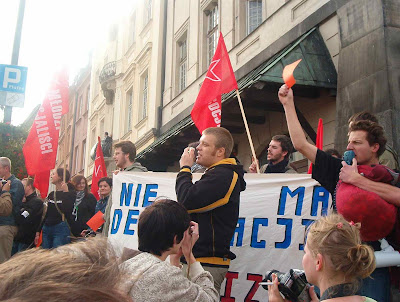 A small but enthusiastic group of socialists gathered to protest the larger march. Again, I couldn't understand a word, but you can glean quite a bit from context. At any rate they had very catchy chants, and were rewarded with quite a large number of shouted remarks from the participants of the larger rally. 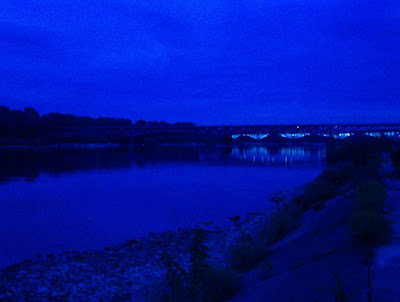 The Vistula River at dusk. 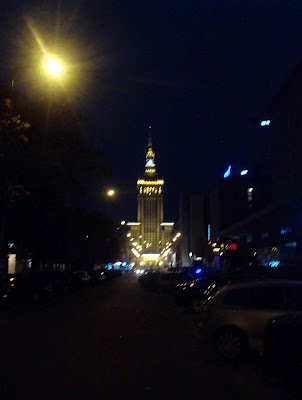 The Palace of Science and Culture was a "gift" from Stalin to the Polish people and since it's still the tallest building in town, it can be seen from just about everywhere. Apparently the Rolling Stones once played at a lounge on the top floor. 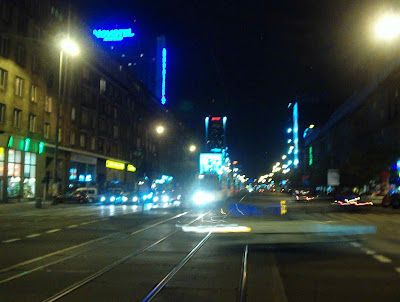 Big city lights. Just as when visiting Budapest a few years back, I found myself continually marvelling at how "modern" and "western" Warsaw appeared. I guess a lot of the Eastern Bloc cities were portrayed as fairly grim during the Cold War, so its interesting to see the city bustle with students and bars and traffic and business-folk. Perhaps this is all new with the fall of Communism, or perhaps it was always there to begin with.